Rahul Gandhi in a tweet targeted the Modi regime saying, "The government disrespected every Indian woman, by arguing in the SC that women Army officers didn’t deserve command posts or permanent service because they were inferior to men. I congratulate India’s women for standing up & proving the BJP government wrong." 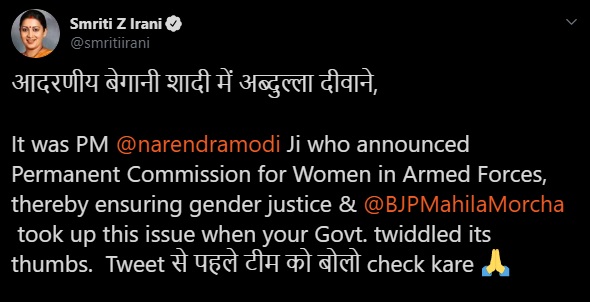 Earlier in the day, insisting on shaking-off typical arguments founded on the physical strengths and weaknesses of men and women, the Supreme Court in a landmark judgement on Monday said the delay in granting permanent commission (PC) to women officers has caused "irreparable prejudice" to them.

A bench comprising Justices D.Y. Chandrachud and Ajay Rastogi, said: "Short Service Commission (SSC) women officers, both within the period of fourteen years' service and beyond, should equally be entitled to consideration for the grant of PCs."

ALSO READ: The Centre will at least talk to us now: Shaheen Bagh protesters on SC's interlocutors