'Aim is to cut Assam and Northeast from India': JNU student Sharjeel Imam

In another shocking video Sharjeel Imam, is seen instigating Muslims to create riots and saying, “Our main aim is to cut the Assam and North-east India from rest of India”.

Former JNU student Sharjeel Imam has made a controversial statement saying that Muslims are in such numbers that they can out the entire Northeast from the rest of India. In a video, Imam is seen instigating Muslims to create riots and saying, “Our main aim is to cut the Assam and North-east India from rest of India”.

In the video, Imam said, "If we have 5 lakh organised people then we can permanently cut north-east from India or at least for one month. Put so much (unclear) on the road that they cannot even remove it for a month. It is our responsibility to isolate Assam from India, then only they will listen to us."

He added, "Do you know what is happening to Assamese Muslims? NRC is already applied there, they have been put in detention centers. We may come to know that in 6-8 months all Bengalis have been killed  - Hindu or Muslim. If we want to help Assam, then we will have to stop the way to Assam for the Indian Army and other supplies."

While it can now be said that Sharjeel's remarks were made at a Citizenship Act protest in Aligarh, the JNU student has also been a regular at the ongoing sit-in protest in New Delhi's Shaheen Bagh. In fact, several media reports have labelled him as the "mastermind" of the Shaheen Bagh demonstration.

In a Facebook post shared yesterday, Imam clarified that the main aim of Shaheen Bagh protest is to do "chakka jam" and rest everything is secondary.

“People need to understand the difference between chakka jam and sit-in protests. Organise sit-in protests in every city and tell people about chakka jam. Then after all the preparation and planning go and sit on the highways,” wrote Imam. 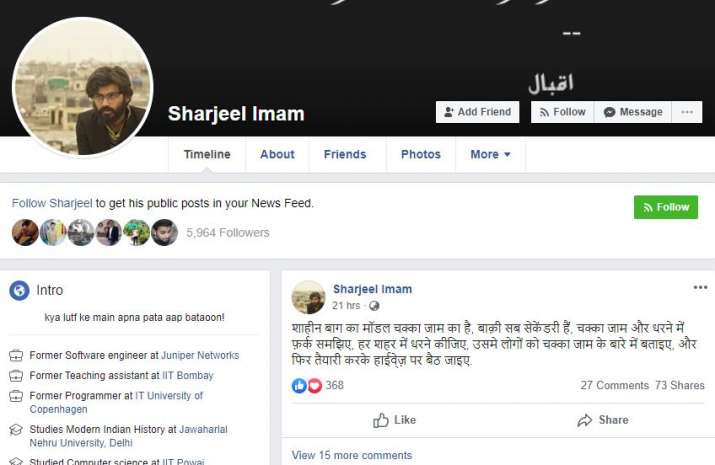 Earlier, BJP leader Kapil Mishra stirred a row by saying that Pakistan has already entered Shaheen Bagh and small pockets of Pakistan are being created in Delhi.

(Earlier report said that Sharjeel Imam made the statement at Shaheen Bagh. However, he has made these remarks in Aligrah)