JNU violence: Mumbai protesters shifted from Gateway of India; no arrests in Delhi yet

Jawaharlal Nehru University came under attack by masked mob on Sunday evening. The alleged ABVP goons stormed inside the JNU campus and the hostels, where they attacked students and teachers with wooden and iron rods. Nearly 34 people were admitted to the hospital after they received injuries during the attack. Protests against the JNU violence rocked Gateway of India in Mumbai where students raised slogans against the Central government.

Scores of people protesting against the violence at Jawaharlal Nehru University were on Tuesday shifted from the Gateway of India in Mumbai. According to a statement by the local police, the protesters were shifted to Azad Maidan in the city as roads were getting blocked and tourists and common people were facing problems. Police had appealed to the protesters to shift but they didn't listen, so they were "relocated" to Azad Maidan, an official said. Protests against the JNU violence continued at the Gateway of India and the Taj Mahal Palace hotel in Mumbai throughout Monday night as protesters sat with tambourines and guitars in their hands, singing songs of revolution.

Massive crowd, including women and students, had gathered at the spot on Sunday midnight. They were joined by Bollywood celebrities like Anurag Kashyap, Swara Bhaskar and Vishal Dadlani.

Mumbai: Protesters(protesting against #JNUViolence) at Gateway of India evicted by Police and relocated to Azad Maidan. (earlier visuals) pic.twitter.com/llYz0OAfYD

JNU campus formed news headlines on Sunday evening after masked mob barged into the university and inside the hostels with iron and wooden rods in their hands. They thrashed students and faculty members after which nearly 34 people were admitted to the hospital. The goons also damaged to campus property, broke windows, furniture and personal belongings. A women's hostel was also attacked.

JNU Students' Union President Aishe Ghosh was among those injured in the incident. She was admitted to the hospital with head injuries and was discharged on Monday.

"It was an organised attack. They were singling out people and attacking. There is a clear nexus of JNU security and vandals. They did not intervene to stop violence," Ghosh told reporters.

No arrests by Delhi Police yet

Even as protests against the JNU violence continue to intensify, the Delhi Police have yet not made any arrests in connection with the attack at the Jawaharlal Nehru University campus. The Delhi Police had registered an FIR in connection with the case on Monday. Various pictures and CCTV videos of the alleged goons have also surfaced since the attack.

Protests were held across India on Monday and the clamour grew for the resignation of the vice-chancellor who is being blamed for inaction during the violence that left 34 people injured.

As horrific first-person accounts emerged of the attack on Sunday evening, including on JNU Students Union president Aishe Ghosh, Delhi Police said that they have transferred the case to the Crime Branch, which claimed to have found "vital clues".

Politicians of all parties condemned the violence. The opposition and JNU students blamed the ABVP, the students' wing of the BJP for the violence, and accused the Delhi Police of inaction. The BJP said campuses should not become a political battleground. 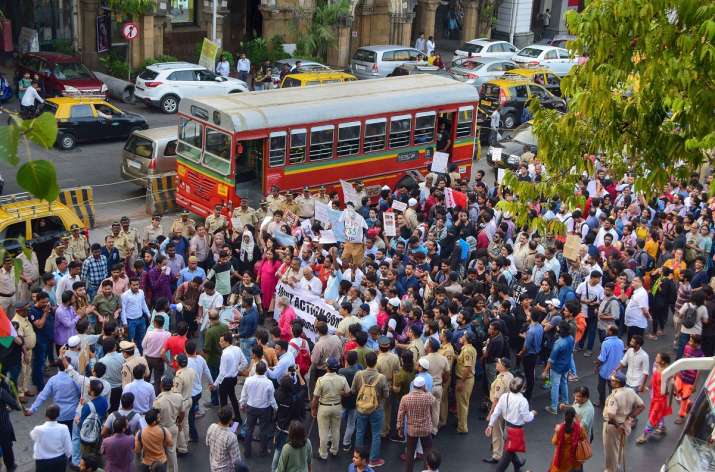 Protesters, waving the tricolour, raised slogans like ‘Kagaz nahi dikhayenge’ and ‘Tum kaun ho be'. They demanded the resignation of Modi and Shah.

Goons of the Akhil Bharatiya Vidyarthi Parishad (ABVP) attacked students by entering the women's hostel at the Jawaharlal Nehru University (JNU), the protesters alleged and demanded that the students' organisation be banned.

Slogans against Modi-Shah and their "tanashahi (dictatorship)" were raised by the protesters as they opposed the Citizenship (Amendment) Act, the National Register of Citizens and the National Population Register. They also brought up the issue of the Transgender Persons (Protection of Rights) Act, 2019, during their protest.

Heavy police deployment was made at the protest site and water, tea, biscuits and fruits were being served to protesters. Civic bodies made arrangements for toilets.

Earlier on Monday, protest were organised near the Hutatma Chowk at Fort, but later permission was denied.

A call was given that people join the protests in front of the Gateway of India. Demonstrations had started there after Sunday midnight.