Barricaded roads, restricted traffic movements yet the whole campus was the echoing with slogans and jampacked with students, supporters and some on-lookers. Almost a day after the brutality against several students of Jawaharlal Nehru University, fear, anxiety and uncertainty prevail among the students.

It is hard getting into the Jawaharlal Nehru University (JNU) campus. A major road leading to the varsity has been barricaded with traffic restrictions in place. The other routes to get there have heavy police presence. At the entrances, a posse of policemen greet the visitors and students.

These were the images greeting people headed to India's top-ranked liberal arts university on Monday, a day after unprecedented videos of masked goons walking around the campus with sticks and rods in hand did rounds of social media and certain TV channels.

What wasn't however completely captured in these videos were the violence that these 50 or so hooligans inflicted on JNU's students and faculty. All one had to rely was eyewitness accounts. 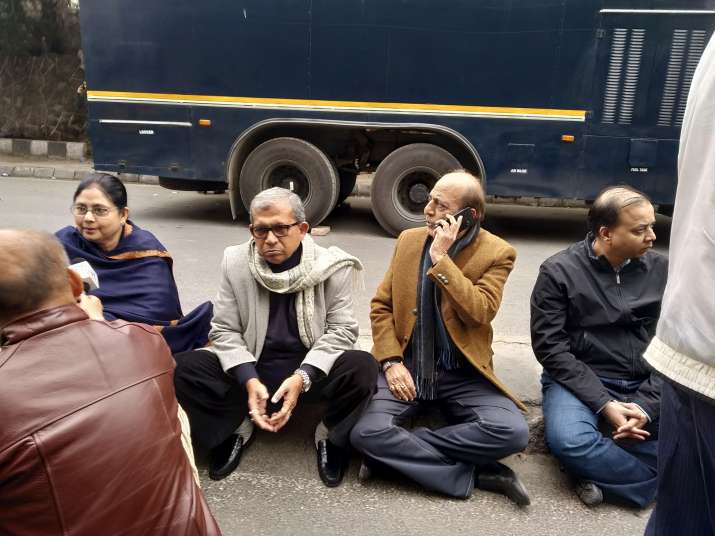 Among the 34 victims of this violence was Aishe Ghose, the President of JNU's Students Union. Beaten with iron rods on a fateful evening, she had to be rushed to AIIMs with serious head injuries.

On Monday, soon after walking out of hospital, she made an appearance on the campus in front of waiting media persons.

"For the first time in the history of JNU, such a violent incident has taken place. The RSS-affiliated professors along with ABVP unleashed an organised attack on the JNU students," she said. 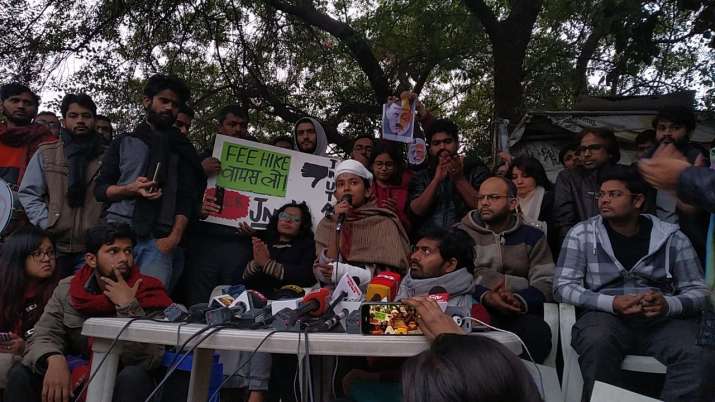 Attacking the right-wing student outfit further, Ghose added, "For the last couple of days, violent activities were being promoted consistently by ABVP and RSS affiliated professors."

Training her guns on the JNU administration and campus security, she said, "They did not tried to stop violence and they left when the violence broke out."

"At 3:30 pm yesterday, I informed the SHO that some unknown people with rods and hockey sticks are roaming around the campus. He had assured me protection but then the police turned mute spectators," she alleged.

The JNUSU President slammed the Vice-Chancellor for being 'incompetent' and demanded his resignation.

She said that continuous efforts were being made to suppress JNU's democratic essence. "Every iron rod used against the students will be given back by debate and discussion. Those who attacked me, have also attacked 8,500 students of JNU who elected me to be their president," she said.

General Secretary Satish Chandra, who was also attacked, said: "Yesterday, after the meeting at the Godavari stop, some masked men led by professor Tapan Bihar entered the area and started pelting stones. During this attack, a professor was wounded. They cornered Aishe Ghose, attacking and abusing her." 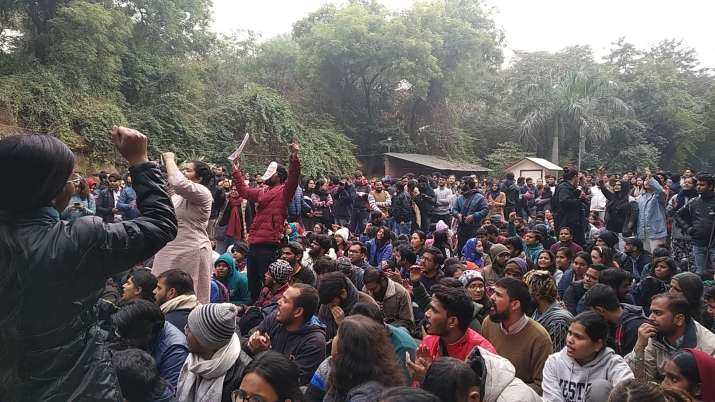 "The mob entered the Sabarmati Hostel and vandalized the premises. They barged inside the rooms and attacked the students. It was a targeted attack," he said.

"The ABVP is a self-centered group and just to fulfill their personal agenda, they are supporting the fee hike in hostels. The whole violence on students was pre-planned," he echoed the claims,  also being made by many of the injured students and teachers.

Almost a day still no answer

Mukesh, a final-year PhD student said: "Our first demand is, there should a fair inquiry in this whole incident. It's been over 24 hours yet no culprit has been caught."

"Whatever happened last night was horrifying. If you go around the premises of Sabarmati Hostel, you will see it was a selective attack. The rooms which were occupied by ABVP students were left untouched," he alleged.

"Blind students have been attacked too," he claimed.

He revealed that the hostel mates demand for additional security at the premises had been denied rexnelt, despite repeated written requests of the residents.

"This shows that the police and administration are on the same side," he said.

" When the violence broke out, the warden ran away. When the students were being beaten up, the guard was also not there. The Delhi Police didn't help us. This shows that they don't have the motive to protect us," he added.

Mukesh also maintained that all the students are scared and they want to stay safe. "We are not criminals, we are students. It is sad that because of ABVP we are being labeled as anti-national, we are students, he added.

Why against hostel fee hike?

Anirudh*, a first-year PhD student informed that people and media are still not aware why the student are against the fee hike.

He explained, "The public thinks why these students are using tax-payers money. I agree that yes, we pay Rs. 10 for two-seater room and Rs. 20 for single bed room. But we have to pay over Rs. 3000 per month on canteen services. After the fee hike, 2 seater rooms will cost Rs. 300 and single bed rooms will cost Rs. 600. Other than that, we will now have to pay Utility charge of Rs. 500, Service Charge of Rs. 1700 and electricity and water charge of Rs. 500. This is privatisation."

"Even though the administration agreed partially roll back the hike, there is still no clarity. That is why the Union is demanding complete roll-back. The ABVP is supporting this hike because there is trend in this Campus that their members get jobs as professors in the University. So,  they want to appease the authorities for their own benefit," he added.

Anirudh* said that the JNU is attacked because it questions.

However, there are still some conflicting claims, whether ABVP is supporting the hostel fee hike or not.

On Sunday night, violence broke out at Jawaharlal Nehru University as masked men with sticks and rods attacked students and teachers and damaged properties on the campus, prompting the authorities to call in the police which conducted a flag march.

At least 28 people including Union President Aishe Ghosh were injured as ruckus stormed the campus for hours.