A 48.62 percent turnout was recorded in the second phase of polling in District Development Council (DDC) elections in Jammu and Kashmir which passed off peacefully on Tuesday.

Bandipora district recorded the highest turnout in Kashmir at 69.66 percent which was the third-highest in the union territory. A turnout of 51.76 was recorded in the first phase on November 28 — 64.2 percent in the Jammu division and 40.65 percent in the Kashmir division.

The election is significant as it is the first major democratic exercise since the Centre abrogated Article 370 that gave special status to J-K and bifurcated the state into two union territories in August year. 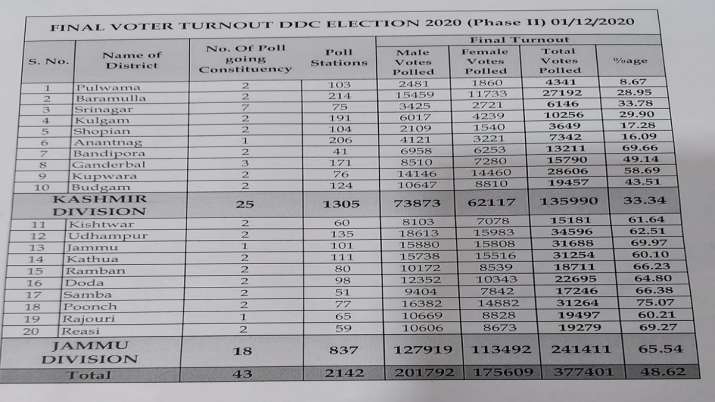 Poonch recorded the highest turnout of 75 percent on Tuesday, while Pulwama retained its position at the bottom, as in the first phase, with just 8.67 percent people casting their votes. Out of the 280 constituencies in Jammu and Kashmir, 43 went to polls in the second phase with 25 in Kashmir and 18 in the Jammu division. Voting was held in 43 DDC constituencies including 25 in Kashmir and 18 in the Jammu region in the first phase.

"We have been appealing to people to vote in the DDC polls as these are very important in electing the decision-making body at the district level. We have run awareness campaigns in this regard but in the end,  it is the people who have to vote, " he said.

Giving details, Sharma said 1.45 lakh people including 62,117 women turned up to cast their votes in the valley. In Jammu, 1.27 lakh male voters and 1.13 lakh female voters exercised their franchise.