Republic Day celebrations: The spirit of patriotism soared and roared on Rajpath as Indian defence forces displayed their might and valour as part of parade.

Tri-colour, national pride and patriotic fervour has taken over the country as India celebrates its 70th Republic Day. The parade from Vijay Chowk to Red Fort Grounds enthraled the hearts of billions of Indians as security forces gave a glimpse of their valour along with the best of artillery, including  M777 American Ultra Light Howitzers, recently acquired from the US and K9 Vajra.

Indian culture was celebrated on Rajpath with 22 tableaux by states and central government departments, and performance by school children. As many as 26 national award winning children, seated in open jeeps, were also form part of the cultural pageant.

Happy Republic Day 2019: Why it is celebrated? History, Importance, Story Behind It

To celebrate the day in peace, the national capital has been covered with a thick blanket of security. Women commandos, mobile hit teams, anti-aircraft guns and sharpshooters have been deployed at strategic locations to keep a close watch on the eight-km-long Republic Day parade route from Rajpath to the Red Fort in central Delhi.

A senior police officer said around 25,000 security personnel have been deployed at strategic locations in central Delhi to ensure that no untoward incident takes place to dampen the spirit of the nation.

Here are the latest updates on Republic Day celebrations from Delhi and across the nation:

A glimpse of Republic Day Parade: India's might and valour envelopes Rajpath

Visuals of the T-90 (Bhishma), the main battle tank of the Indian Army, commanded by Captain Navneet Eric of 45 Cavalry #RepublicDay2019 pic.twitter.com/NjGHg2oMDS

#republicdayindia 26 children including 6 girls and 20 boys have been honoured with Pradhan Mantri Rashtriya Bal Puruskar 2019 pic.twitter.com/8xxrTEM2OX 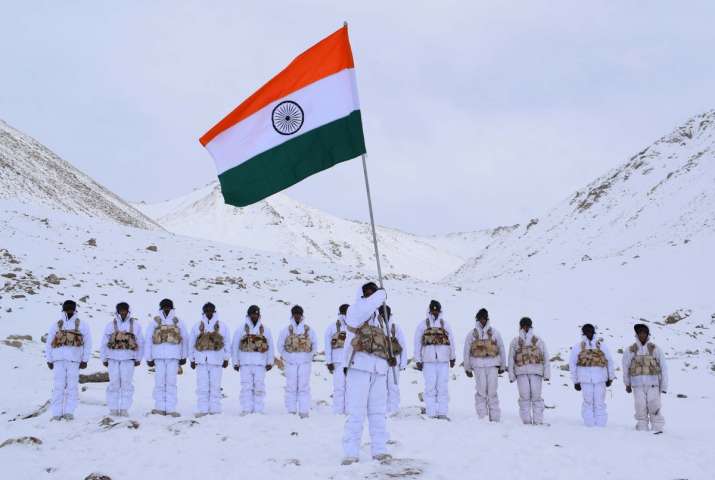 10:50 am: Sweets exchanged at Attari-Wagah border.

10:05 am: President Ram Nath Kovind awards Ashok Chakra: Lance Naik Nazir Ahmed Wani, who lost his life while killing 6 terrorists in an operation in Kashmir, awarded the Ashok Chakra. Award was received by his wife and mother.

10:00 am: 21-gun salute roars patriotism: The spirit of patriotism soared and roared as the national anthem was sung in the accompaniment of booming 21 gun salute at the Rajpath here during the Republic Day function. The well-coordinated gun salute by seven cannons of 2281 Field Regiment starts with the first note of the national anthem and ends with the last. The duration of the 21 gun salute coincides with the length of the national anthem. Each gun (25-pounder) is handled by a team of three personnel. Special clocks are used to measure time in smaller units for precision. Also, back up gun are there to the meet the situation where a gun does not go off. The battery fires 21 rounds in 52 seconds.

10:00 am: Parade of India's might, valour and culture begins at Rajpath

09:45 am: PM Modi pays tribute to martyrs at Amar Jawan Jyoti. The PM, president and Chief Guest  President Ramaphosa will move to Vijay Chowk where the parade will begin shortly. 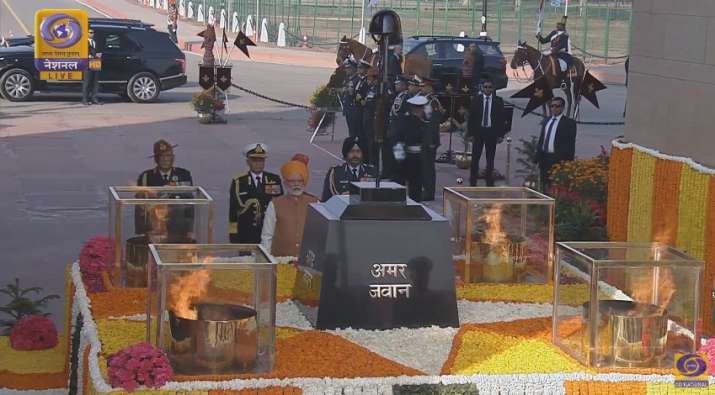 08:45 am: Naval contingent comprises 144 young sailors: The Naval Contingent will comprise of 144 young sailors led by Lieutenant Commander Ambika Sudhakarn as Contingent Commander. It will be followed by Naval tableau titled, ‘Indian Navy – Combat Ready Force for National Security’, which will proudly illustrate the combat potential of the multi-dimensional Indian Navy of the 21st Century.

08:32 am: BJP President Amit Shah unfurls the tricolour at the party office in Delhi.

08:30 am: Anti-aircraft guns, SWAT women commandos, snipers deployed in Delhi: SWAT women commandos, mobile hit teams, snipers are among the varied layers of security under which the national capital has been placed for the Republic Day celebrations. Elaborate measures, including deployment of anti-aircraft guns, were put in place to secure the airspace. Following the arrest of two suspected Jaish-e-Mohammad (JeM) members, who were planning to carry out terror strikes in the city during the 70th Republic Day celebrations, Delhi had been placed under high-security cover to avoid any terror strike or untoward incident. The arrested members of the JeM had identified Lajpat Nagar market, Haj Manzil, Turkman Gate, Paharganj, India Gate and the IGL gas pipeline in east Delhi as potential targets, police said.

Crowds gather for the #RepublicDay2019 parade at Rajpath in Delhi. President of South Africa Cyril Ramaphosa is the chief guest at the parade today. pic.twitter.com/dZCOKSXTiY

08:00 am: 'Indian' martial tune `Sankhnaad' to be played at the parade: `Sankhnaad', a martial tune created for the Indian armed forces, will be played for the first time on the 70th Republic Day parade. This new tune has been composed by Dr Tanuja Nafde, a vocalist (Hindustani classical), academician and composer from Nagpur. Since independence, the Indian defence forces have been playing 'martial tune' created before independence by the Britishers. This year, we break the colonial tradition.

07:45 am: Traffic Police advisory: The Delhi Traffic Police has advised commuters to plan their journeys in advance to avoid delays and avoid the route of Republic Day parade between Vijay Chowk and Red Fort grounds in the national capital 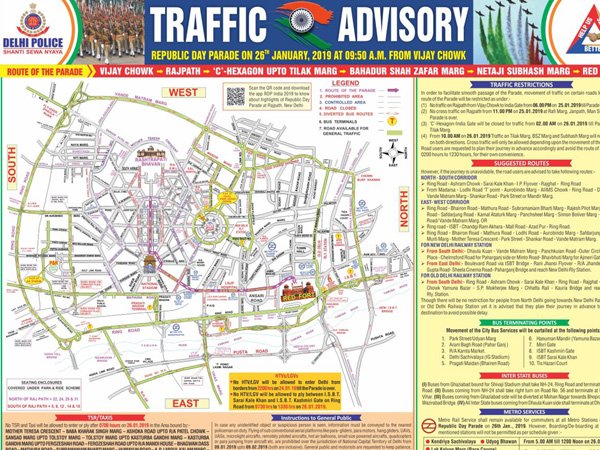 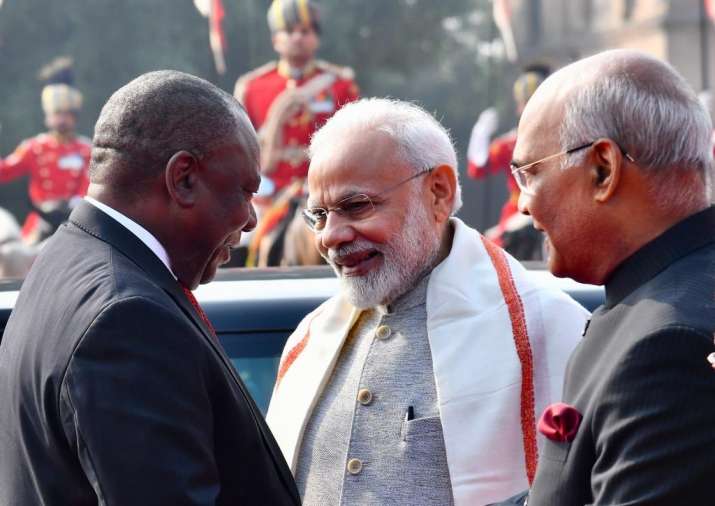 06:30 am: The Republic Day Parade Ceremony will commence with Prime Minister Narendra Modi leading the nation in paying homage to the martyrs by laying a wreath at the Amar Jawan Jyoti under India Gate. Then, President Ram Nath Kovind will hoist the flag at 9.00 am after which the Republic Day parade will kick off from Rajpath at 9.50 am.

Maharashtra: More than 3500 students gathered to create large portraits of freedom fighters Bhagat Singh, Rajguru and Sukhdev on the eve of Republic Day in Pune. pic.twitter.com/RCYPUpcfrj

06:00 am: Traffic restrictions in New Delhi: According to a traffic advisory, no vehicle has been allowed on Rajpath, from Vijay Chowk to India Gate, from 6pm on January 25 till the parade is over. No cross-traffic will be allowed on Rajpath from 11.00pm on January 25 at Rafi Marg, Janpath, Man Singh Road till the parade is over and ‘C’-Hexagon-India Gate will be closed for vehicular movement from 2am on January 26 till the parade crosses Tilak Marg, it said. No vehicular movement will be allowed on Tilak Marg, BSZ Marg and Subhash Marg in both directions from 10am onwards, Joint Commissioner of Police (Traffic) Alok Kumar said.

05:50 am: Exits blocked from Metro stations: Metro services will be available for commuters at all stations on Republic Day, but there will be no boarding and de-boarding at Central Secretariat and Udyog Bhawan stations from 5am to 12pm. Boarding and de-boarding will not be allowed between 8.45am and 12pm at Lok Kalyan Marg (Race Course) and Patel Chowk metro stations, they said.

05:30 am: Republic Day Parade timings: The 90-minute-long parade will start at 9.50am from Vijay Chowk and pass through Rajpath, Tilak Marg, Bahadur Shah Zafar (BSZ) Marg, Netaji Subhash Marg and proceed for the Red Fort. A function will be held at India Gate at 9 am. As per tradition, after unfurling the National Flag, the national anthem will be played with a 21 gun salute. The parade will then commence and the President will take the salute.

05:00 am: Key shows to watch out for at this year's Republic Day celebrations:  After a gap of three years, the railways is all set to showcase its tableau in the Republic Day parade depicting the "transformation of Mohandas Karamchand Gandhi to Mahatma Gandhi" and highlight the yet-to-be-launched bullet train and Train 18. The main attraction at the Republic Day Parade 2019 will be an all-woman marching contingent, who will be taking part for the first time. The tableau of Gujarat, which will depict Mahatma Gandhi’s ‘Historical Dandi March’.