Will Karan Wahi tie the knot with the love of his life soon? See what Dill Mill Gayye actor has to say!

Counted amongst one of the handsome hunks of the small screen, actor Karan Wahi has been winning the hearts of many female fans for his chocolate boy looks. Having worked in some popular shows like Dill Mill Gayye, Khatron Ke Khiladi, Remix, etc we have heard about him dating various actresses including Jennifer Winget. But now it seems that the actor has made it official with a London-based girl named Uditi Singh with whom he is a relationship form the past six months now. The girl belongs to Chandigarh and currently resides in the UK and therefore the actor is frequently spotted spending quality time with his lady love.

There were reports of the actor dating fashion photographer, Jinita Seth but the duo parted ways in the year 2017. Ever since he has been in love with Uditi but has not announced anything officially. However, the madly in love posts, pictures and captions which he puts upon his social media are proof that there's something more than friendship brewing between the two. Recently, he shared a picture with a cryptic caption that read, "Waise toh Main kaaafi Sakht Launda hoon Par Isss baar main Pighal Gaya."

There were rumors abuzz that the couple is planning to take things forward which got cleared when the actor spoke to TOI in an interview where he said, "Mere wedding plans mujhe pata chale toh mai aapko bata dunga. Why would I keep a secret? I did not keep a secret when I didn't have to (referring to his Instagram posts with Uditi Singh) so, that question is out of the picture and now the next question has come. No wedding plans yaar.”

A lot of celebrities are in awe of the love that is sprouting between the two and keep on commenting on their mushy pictures. A recent picture posted by the actor had the caption, "When it’s U Iam K... @uditisinghh."

This caught the attention of many like Ekta Kapoor, Mohena Kumari and Krystle D Souza who commented on his post. Have a look: 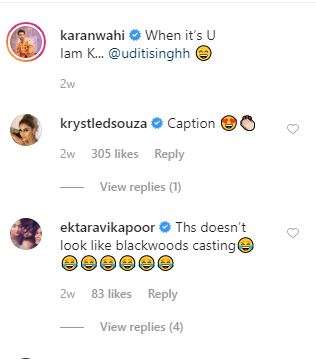 On the work front, Karan will next be seen hosting an interesting show Game On! which will revolve around cricketers and musicians.