For the unversed, Rithvik Dhanjani and Asha Negi met on the sets of Ekta Kapoor's popular show Pavitra Rishta in 2011. They had also participated and won dance reality show Nach Baliye 6. After dating for six years they parted ways last year. On the occasion of ex-boyfriend Rithvik's birthday Asha penned a sweet note. Check it out here. 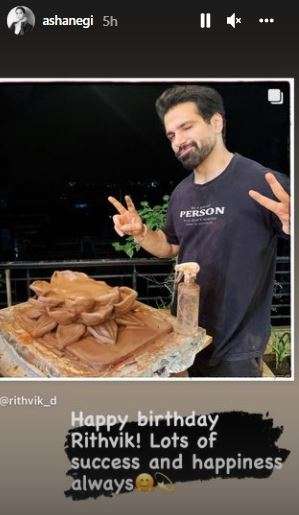 The pictures are from September this year when Rithvik was preparing for Ganpati. In one of the pictures, Rohan Shah can also be seen. Sharing the post then, he had captioned it, "Bappa making DAY 2. LOTUS -A beloved symbol that blossoms and grows through slime and pond scum, it teaches us that we can bloom too, live with the virtue during rough times and your heart will eventually know the sun. Trust in the light, Grow through the dirt, believe in new beginnings."

For the unversed, Rithvik and Asha met on the sets of Ekta Kapoor's popular show Pavitra Rishta in 2011. They had also participated in and won dance reality show Nach Baliye 6. After datiung for six years they parted ways last year. While they did not release an official statement about it, they did confirm the news while speaking to multiple media outlets.

Opening up on their relationship, in a chat show 'By Invite Only Season 2' Rithvik said, "I can't begin to thank my stars enough, not just for that relationship and not just for Asha being a part of my life but for each and every human being that loves the both of us together. Till date I still have people asking me about the times we spent on Pavitra Rishta together.

"My love is celebrated, and it still has wings. I am in a great place; she is in a beautiful place. I wish the best for her. I think those 9-10 years of my life were the best thing that has ever happened to me, it really made me who I am, and she really helped me become so much better of a human being. I can't thank her enough. It's been a beautiful union up until the time it was. We now probably have different ways and journeys. And that's all that I live by every day."

Also read: Rithvik Dhanjani on break-up with Asha Negi: 'I am in a great place; she is in a beautiful place'

On the work front,  Asha was seen in the ALTBalaji series Baarish 2, Zee5 series Abhay 2 and Netflix film Ludo.