Shah Rukh Khan is not only the King of Romance or the Badshah of Bollywood, but he’s also the master of quick wit and oratory skills. The superstar was on India TV’s mega conclave TV Ka Dum with Saas Bahu Aur Suspense host Charul Malik and actor Maniesh Paul to talk about the impact of television on overall entertainment industry. While addressing the audience, SRK humbly shed light on his journey in television and how it propelled him to a superstar. The show was held in Mumbai on February 2 and was hosted by SBAS host Charul Malik and actor Maniesh Paul.

For the uninitiated, Shah Rukh Khan stepped into entertainment industry with a television serial Fauji in 1989 which shed light on the training of army cadets. He played the titular role of Abhimanyu Rai which shot him to fame among the Indian audience. After this, he also featured in Circus, Idiot, Umeed and Wagle Ki Duniya. To be precise, in the words of Badshah himself, SRK owes everything he has now to television. 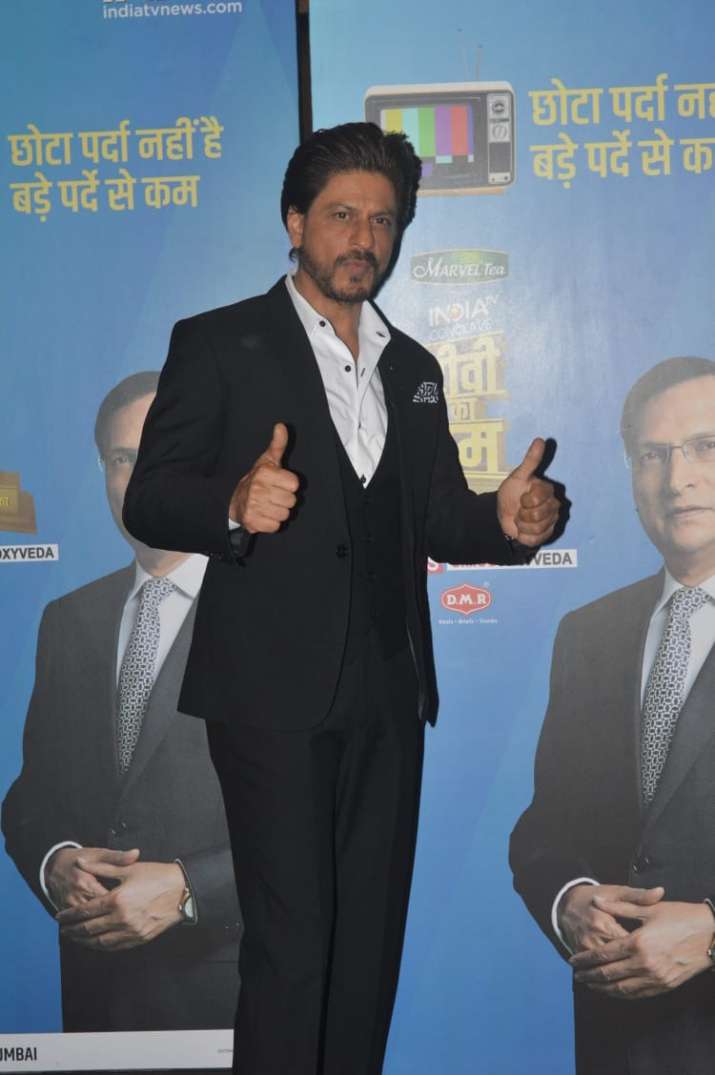 I would like to return on small screen if my films don’t work: Shah Rukh Khan

Taking a light-hearted jibe on himself, quick-witted as he is, Shah Rukh Khan said he might return to the small screen if his films don’t work. He even went on calling himself ‘TV Ka Dum’ since he owes his stardom to the television series he did during his early days.

He said, “If my films are underperforming, I will return to TV to work here. I’m saying this with utmost humility. Many people including me have risen from television. I’m a living example of TV ka Dum. I started with small screen. I used to watch Sunday movies at rich neighbour’s house. I started from those days when TV was a cardinal thing in our life. “

“Ramayana and Mahabharata were the greatest shows ever made. It brought us closer to us our mythology,” he added.

Talking about his struggling period in life, Shah Rukh Khan revealed that with the help of television fee, he was able to reach Mumbai.

He said, “I used to get RS 1500 per episode for Fauzi. With Rs 15,000 in my wallet, I reached Mumbai and realised my Bollywood dream. I couldn’t have made it to silverscreen without small screen.” 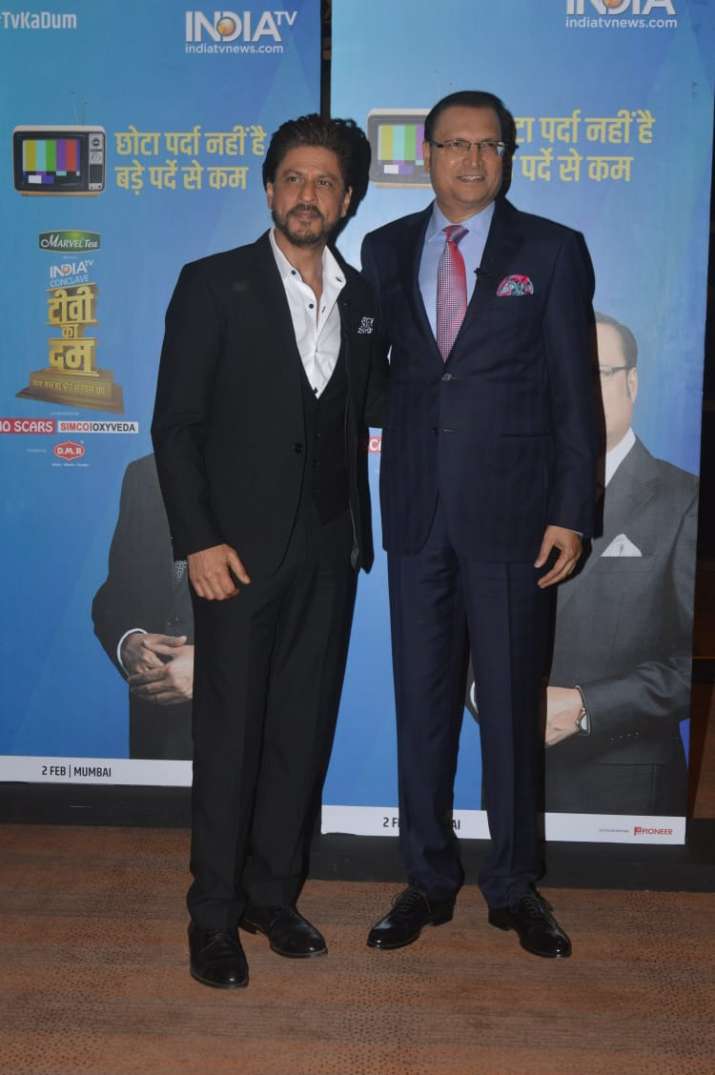 Shah Rukh Khan also lauded India TV’s Chairman Rajat Sharma and his 25-year-old show Aap Ki Adalat. He said, “I believe television should be like Rajat Sharma. Aap Ki Adalat is very well-known among the masses, still it doesn’t get boring. It makes you laugh, without being crass. It reminds us that you can still be funny and interesting without being indecent.”

Shah Rukh Khan, Maniesh Paul and Rajat Sharma tried their hands on SRK’s signature arms open pose, which made the highlight of the evening. The superstar even danced to Chaiyya Chaiyya with his fans.

For the unversed, SRK didn’t intentionally invented his signature pose! Finally revealing his secret, he said,” I was trying to perfect a dance step on a film set with choreographer Saroj Khan. It was the first time I realised that I cannot dance. Lazily, I just stood on my place and spread my arms and Saroj Ji was like ‘Wow’. So that’s how that signature step was invented ACCIDENTALLY.”

When a fan asked Shah Rukh Khan when they can see all the three Khans together on a silver screen, the actor had the wittiest answer. “When India TV will produce a film and cast me, Aamir Khan and Salman Khan together, only then you can see us sharing screen space. Apart from this, I cannot see any other possibility.” 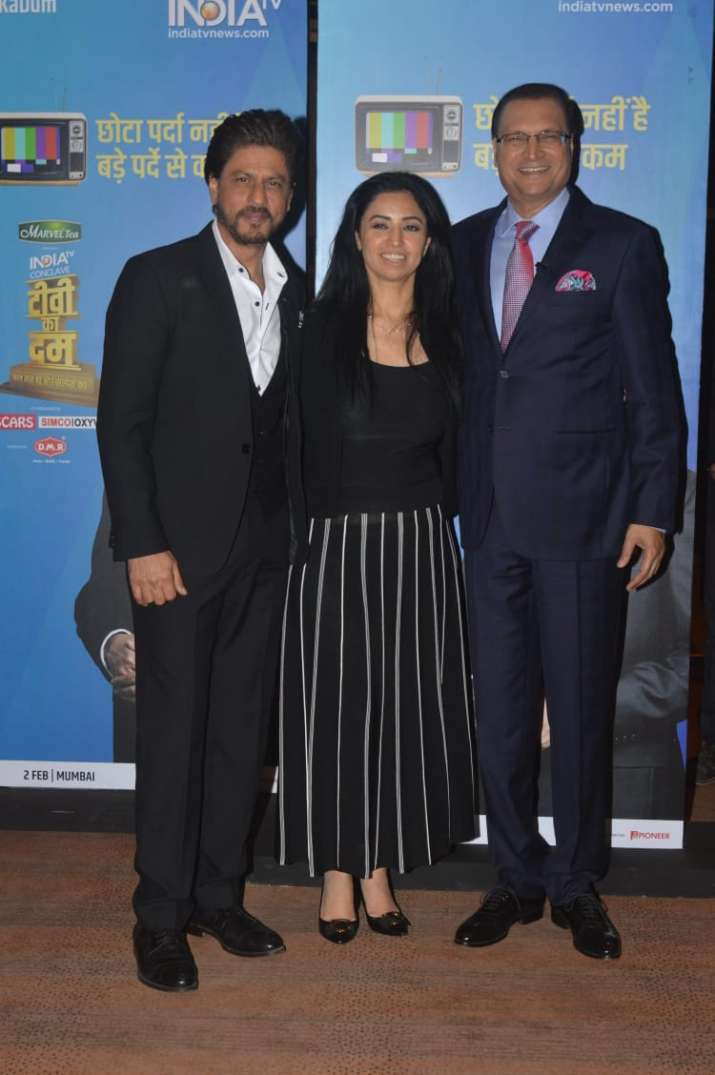 On the work front, Shah Rukh Khan was last seen in Aanand L Rai’s Zero which also Katrina Kaif and Anushka Sharma in the lead role.