"Do not go gentle into that good night,
Old age should burn and rave at close of day;
Rage, rage against the dying of the light.

"Though wise men at their end know dark is right,
Because their words had forked no lightning they
Do not go gentle into that good night."

These oft heard lines of Dylan Thomas's poem in the film, are the underlying pitch of "Interstellar".

With a pessimistic premise and an optimistic outlook (read message), Christopher Nolan's latest film "Interstellar" is a multi-layered offering which sways randomly from an apocalyptic drama to a psychological thriller to a disaster film, with equal ease. 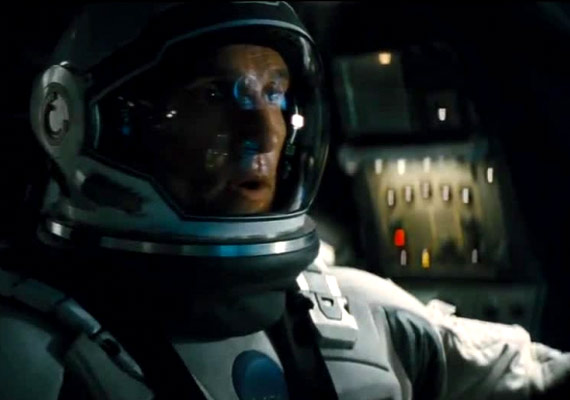 Time, space, gravity and death, which are relative, are interwoven with; belief and faith, parental bonding, love and survival to make this an intelligent, melodramatic science fiction.

Humanity is running out of time on earth. Due to the climatic changes in the environment, survival on earth becomes an issue. Crops are failing, and pretty soon there'll be nothing left to produce the oxygen required to sustain life. Earth's last hope is the secret NASA plan to seek out appropriate alternate planets in the galaxy for humans to live.

Cooper (Matthew McConaughey), an ex-pilot turned farmer, is forced to lead a team that includes Dr. Brand (Anne Hathaway) and a faceless, wise-cracking robot named TARS for the mission. The film is his journey.

Narrated through Cooper's daughter Murph's point of view, the film is poetic and ambitious. It is his heart-wrenching decision to leave his son and daughter behind and give them both and the planet one last chance at salvation, that forms the crux of the tale. 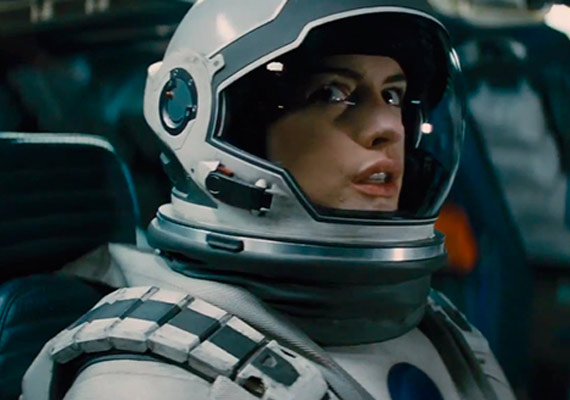 Performance-wise, McConaughey leads the team with his inspiring subtle performance. While he constantly dreads that his daughter will look down on him forever and never know his true intentions, he justifies his action with "Once you are a parent, you are the ghost of your children's future." This statement ironically helps the director to wrap-up this wide-spread narration of the film.

Mackenzie Foy as Cooper's boisterous daughter Murph, named after Murphy's Law and Anne Hathaway as the independently strong scientist Dr. Brand along with Michael Caine, as her genius father, are effective.

Humour comes in the form of some smart-alec lines shared between Cooper and TARS.

The film is technically well-crafted technically, but lacks perfection in terms of logic.

Lee Smith's razor-sharp edits, especially during the climax, which shuttles between the scenes on earth and in the galaxy, are worth a mention.

With a mission larger than life, shot on anamorphic 35mm and IMAX film, "Interstellar" has its few moments of visual brilliance, which can be noticed particularly when the cruising spacecraft docks on the various wonderful terrains in the galaxy. These images are coherently layered with Hans Zimmer's dramatic background score with varying decibel levels, which makes a worthwhile experience.

With a 169-minute run time, the film drags in parts, but never fails to intrigue.