Oscar favorites Julianne Moore, Patricia Arquette and J.K. Simmons cemented their front-runner status Sunday in a ceremony that often serves as a kind of preview to the Academy Awards.

Keaton led the "Birdman" cast, including Emma Stone, Edward Norton and Zach Galifianakis, in accepting the top honor from the acting guild, calling the profession "the ultimate team sport."

"Every time I turned around, I ran into another tremendous actor," said Keaton.

Redmayne, who stars as Stephen Hawking in "The Theory of Everything," was the surprise winner in a category expected to go to Keaton for his career-capping performance as a Hollywood has-been trying to mount a comeback on Broadway. Redmayne dedicated his award to sufferers and victims of ALS.

Moore, widely considered the best actress favorite, won most supporting actress for "Still Alice," in which she plays an academic with early-onset Alzheimer's.

Accepting the award for most outstanding supporting actor for his performance as a domineering jazz teacher in "Whiplash," Simmons thanked all 49 actors who appear in the drama.

"Boyhood" star Arquette added the latest in a string of awards, taking the supporting actress honor for her performance, filmed over the course of 12 years.

"I can't tell you what this means to me," said Arquette. "I'm a fourth-generation actor. My family has been committed to acting for over a century, through feast or famine."

The show kicked off with a pair of wins for the Netflix prison series "Orange Is the New Black," honoring it as best ensemble in a comedy and naming Uzo Abuda most outstanding actress in a comedy series.

Best ensemble cast in a drama series went to "Downton Abbey," the second time the series has won the category.

Because actors make up the largest portion of the Academy of Motion Pictures Arts and Sciences, the SAG Awards are also considered one of the most telling Oscar previews. Last year, the top four winners — Matthew McConaughey, Cate Blanchett, Lupita Nyong'o, Jared Leto — all went on to win Academy Awards after first scooping up SAG awards. 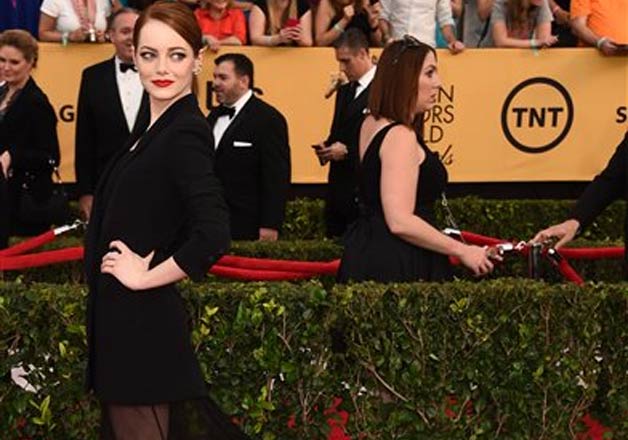 Two actors who usually reside on the big screen won the SAG awards for performances in a miniseries or TV movie: Mark Ruffalo (for HBO's "A Normal Heart") and Frances McDormand (for HBO's "Olive Kitteredge"). Kevin Spacey ("House of Cards"), William H. Macy ("Shameless") and Viola Davis ("How to Get Away With Murder") also collected awards.

Debbie Reynolds, the "Singin' in the Rain" star, was honored with the SAG lifetime achievement award, which her daughter, Carrie Fisher, presented.

Read all the Breaking News Live on indiatvnews.com and Get Latest English News & Updates from Entertainment and Hollywood Section