Tara Sutaria shared a gorgeous picture of herself relaxing by the sea in a black monokini. Soon after she shared the sizzling photos, her fans flooded the post with compliments.

Student Of The Year 2 actress Tara Sutaria never fails to amaze her fans with her charismatic photos on social media. From her picture-perfect looks to her elegance, fans go crazy about everything she does. After delivering a spectacular performance in her last release Marjaavaan opposite Sidharth Malhotra, the actress has flown away to the Maldives to enjoys a ‘me time’. Tara has been sharing special moments from her vacation and making fans jealous of her beautiful surroundings.

On Tuesday, Tara Sutaria shared a gorgeous picture of herself relaxing by the sea in a black monokini. Soon after she shared the sizzling photos, her fans flooded the post with compliments. One user wrote, “Just waowww and hottie”. Another said, “Aagh lga rhi ho” In the photo, Tara is seen donning a black hat and taking in the serene atmosphere around. She captioned the photo with South-African singer Miriam Makeba's song Malaika. She wrote, "Malaika, nakupenda malaika," which when translated to English reads "Angel, love you angel." Check out-

Tara Sutaria recently ruled the internet for her alleged relationship with Kareena Kapoor Khan’s cousin brother Aadar Jain. While the couple did not come out in the open about their connection, they shared a post on Instagram which pretty much confirmed that they are dating. At the U2 concert in Mumbai in December last year, the couple was spotted together. Aadar shared a photo of the same and wrote: "When am with you'' and tagged Tara. To this, the actress replied: "Always with you." She added a heart emoticon with her words for the right mushy effect. 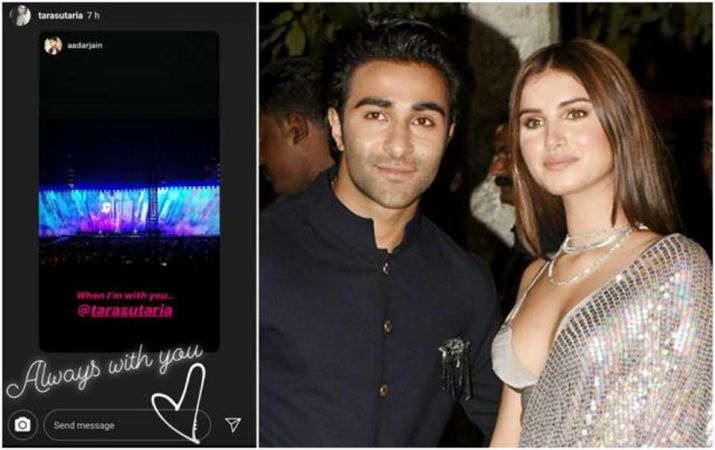 On the professional front, Tara Sutaria will next be seen in Milan Luthria’s Tadap, which is a remake of the Telugu hit RX 100. Tadap marks debut of Suniel Shetty’s son Ahan Shetty.

"Being trolled is part & parcel of my job", says Tara Sutaria