Tahira Kashyap raided Ayushmann Khurrana's closet and shared a photo where she was seen dressed in his jacket over a black t-shirt and paired it up with sunglasses. Alongside she wrote, 'We believe in gender fluidity.' Look how the 'Gulabo Sitabo' actor reacted on the same.

Due to the ongoing COVID-19 lockdown in the country, actor Ayushmann Khurrana has become quite active on social media just like many other Bollywood celebrities. The 'Dream Girl' actor who is quarantining with his wife Tahira Kashyap and his kids Virajveer and Varushka treats fans with photos, poetry, songs, and a sneak peek into his quarantine life. Not only this, sometime back he even shared a video of a challenge with wife and made fans go gaga over their chemistry. But that's not all! Just like many others like Virat Kohli-Anushka Sharma, and Ranveer Singh-Deepika Padukone, Ayushmann-Tahira too have added on their name in the list of celebrities who wore their spouse's clothes. Taking to Instagram, Tahira recently shared a photo of herself juxtaposed with Ayushmann's photograph in which she was seen wearing the same jacket which he wore.

Tahira, however, decided to add her style quotient in the same and wore it over a black t-shirt paired it up with sunglasses. The jacket was black in colour white prints of CDs on it. Captioning her photo, Tahira wrote, "We believe in gender fluidity (along with a heart emoji)." Soon the photo was re-share by Ayushmann who wrote, "Umm..." 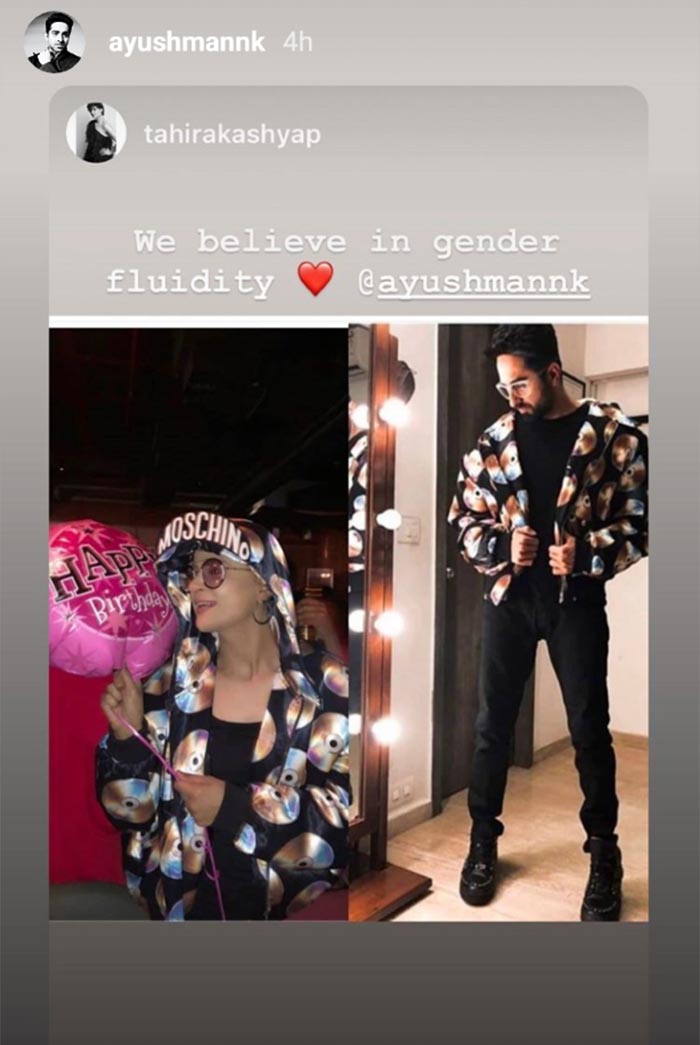 Meanwhile, check out 'who's always right' in their relationship here:

In an Instagram post for Tahira, Ayushmann revealed how he proposed his lady love and wrote, "It was in 2001. We were preparing for our board exams. At 1.48 AM I’d confessed my feelings to her over the phone. Bryan Adams was playing on my stereo. Inside Out was the song. It’s been 19 years with this goofball. Umm."

On the occasion of World Environment Day, Ayushmann shared a post and wrote, "My #OneWishForTheEarth would be that all of us should use water consciously. It is an extremely vital resource and everyone should do their bit in saving water at all times. @bhumipednekar amazing initiative  #ClimateWarrior #WorldEnvironmentDay."

On the professional front, Ayushmann's film Shubh Mangal Zyada Saavdhan which released earlier this year gained tremendous response from his fans and critics. He will next be seen in Shoojit Sircar's Gulabo Sitabo along with Amitabh Bachchan. The film is slated to release on Amazon Prime Video on 12th June 2020.