Rana Daggubati's fiance Miheeka Bajaj has a connection with Sonam Kapoor and family. Know how

Baahubali actor Rana Daggubati surprised his fans by making his relationship with girlfriend Miheeka Bajaj official on Instagram. Many stars wished the couple including Bollywood actress Sonam Kapoor with whom Miheeka shares a close bond.

Finally, some good news in the time of coronavirus crisis arrived when Baahubali actor Rana Daggubati surprised his fans with the announcement of his engagement with girlfriend Miheeka Bajaj. He took to Instagram and made it official with his lady love by sharing a beautiful picture with a caption that read, "she said yes!" This news sent waves of excitement on the internet and not just fans but also other actors started congratulating the couple. From Chiranjeevi to Kiara Advani, wishes pour in from both the Bollywood and the regional film industry. One amongst those were actress Sonam Kapoor who took to Insta story and wished the couple by writing, "Congratulations my darling baby @miheeka I love you doll.. you deserve the best... @ranadaggubati better make you happy..love you both! Welcome to the fam Rana!"

Miheeka who is a Hyderabadi at heart moves a lot between Mumbai- Hyderabad for work purposes. She has been into the interior decor and event business called Dew Drop Design Studio since 2018 and is close to a lot of Bollywood celebrities including the Raanjhana actress and her family. Sonam's father and actor Anil Kapoor also congratulated the couple and wrote, "Congratulations my Hyderabad son. I am so happy. The best thing to happen to both of you." 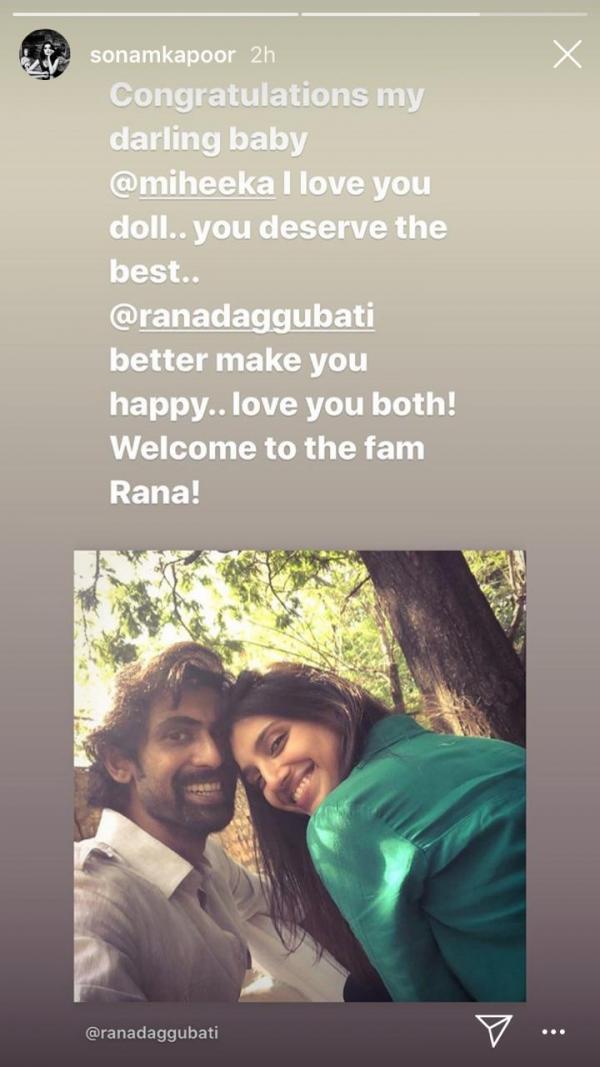 From wishing Sonam on her birthday to being by her side on her wedding day, Miheeka's Instagram feed proves she is super close to the Kapoor family.

On the actress's birthday, she shared a post and wrote, "Happy happy birthday Sona!! Here’s to many more nights of binging on junk, making you do my art projects, and fussing to sit on your lap! Love you to the moon and back!."

Miheeka was also spotted posing along with Shanaya Kapoor at Sonam's wedding.

Meanwhile, have a look at some pictures of the bride-to-be here:

Coming back to the actor, he was earlier in a relationship with Trisha Krishnan. He was rumoured to be dating Rakul Preet Singh. However, the actress cleared the air in an earlier interview and said, "Oh My God!, I and Rana Daggubati are neighbours. We have a close gang which also includes South actress Lakshmi Manchu. Rana Daagubati is also one of my closest friends. He’s been a friend since I started my film journey in the film industry".