Chingari is an Indian alternative to the now-banned TikTok in the country. Read on to know more about it

After a lot of speculation, TikTok has been banned in India. The popular short video-sharing app has been banned along with 58 other Chinese apps citing security and privacy issues in the country. Over a period of time, TikTok has received enough backlash in the country to get its Indian counterparts in the form of Roposo, Bolo Indya, and the most recent one Chingari. The year-old app is now gaining a lot of popularity and could be your proxy to TikTok, given that TikTok is banned in India. Read on to know more about the app.

Chingari is an Indian video-sharing app that has just started getting popular. While it was launched last year, it now has 2.5 million downloads on the Google Play Store, going up from 100,000 downloads in just a month. It has been developed by two Bengaluru-based programmers -- Mr Biswatma Nayak and Mr Siddharth Gautam.

The app is primarily a short video-sharing app, much like TikTok. But what's more interesting about it is that it is home to trending news, memes, status videos and whatnot for users to stay entertained. The app allows you to earn money via the short videos they have posted, also akin to TikTok. You will get paid based on the rated at which their video has gone viral, will get a point per view, and the total points can be encashed. Additionally, there is a Game Zone that allows you to play games and even earn money by playing some.

The TikTok rival is available in English, Hindi, Bangla, Gujarati, Marathi, Kannada, Punjabi, Malayalam, Tamil, and Telugu. It is available for both Android and iOS users can be downloaded via the Google Play/App Store by heading to the respective app stores>searching for the Chingari app>select the app and then the install option to get it on your smartphone. 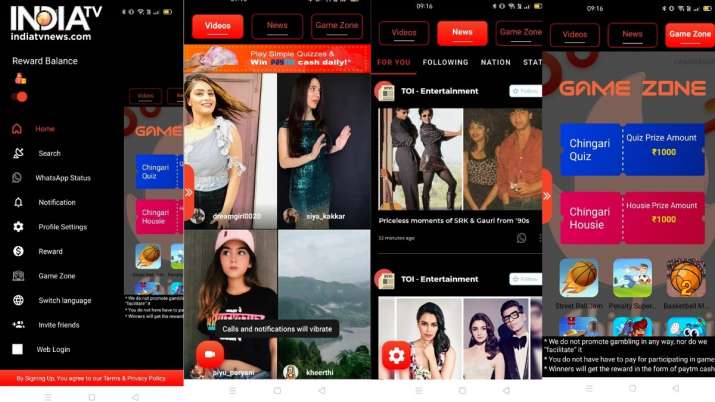 When I downloaded the app on my Android smartphone, it opened up its terms and conditions that had details about its privacy policies. It is suggested that the app focuses on the privacy of the user and is transparent. It collects users' phone numbers for the creation of the account but doesn't share or sell it and information such as how the app is used, performance diagnostics, and more. You need to accept the terms and conditions as the first step to start using the app.

Following this, you need to select the preferred language and you are good to start using it. Register before using it though. The app is divided into three sections: Videos, News and Game Zone. As the names suggest, the three sections feature content such as short videos, news from every beat, and games to play, respectively. The app supports swipe gestures and users can access each section with a swipe. By swiping the small sidebar, you can access the Settings menu for more options to explore.

The Chingari app is an easy-to-use app with interesting elements that make it a good alternative to the now-banned Chinese app TikTok.