In an exclusive chat with former India captain Anjum Chopra, we talk about one-off Test and the concerns India faced in the ODI series as they gear up for the World Cup next year.

The Indian team has been the busiest since the start of the pandemic and regardless of the outcome of their month-long England tour, their performance has been much talked about.

Harleen Kaur's near impossible catch had even PM Narendra Modi speechless. This was the team's maiden Test appearance in seven years and the valiant fightback from the lower order to pull off a draw was memorable.

In an exclusive chat with former India captain Anjum Chopra, we talk about one-off Test and the concerns India faced in the ODI series as they gear up for the World Cup next year.

Q: We had the wonderful Test match, the first for India after seven years. You have played 12 tests for India. How did you feel when India’s long wait for Women’s Test ended and the day finally arrived?

Yes, it is important that Test match as a format resumes for women's cricket as well. It was obviously good news, especially to hear it on International Women's Day, when the announcement was made by the honourable secretary of the BCCI that the format would resume, and then shortly after, we got to hear that they would also play a Pink Ball Test in Australia. Cricket in whites is obviously very good to watch and to play it is very different. It is the purest form of the game. So, it seemed like I was just a spectator of the Test match.

Q: Who impressed you the most?

Sneh Rana and Deepti Sharma both impressed me. In the second innings, Taniya Bhatia. Their commitment and resilience were very good to see. Obviously, most of them were inexperienced in red-ball cricket. But I loved how Taniya and Rana, especially in the end, approached the chase and of course Deepti's batting in both the innings. So it was very impressive.

Q: Where do you stand on the debate for a five-day women's Test match?

First, let’s start having Test cricket. I mean, you go about increasing the number of days from four to five but here we are not even playing four-days Test cricket regularly. It's of course an opinion and I understand where it is coming from. It would have been a result-oriented Test match had it been a five-day game. It's important to also be realistic. We first need to start playing the format on a regular basis before coming back to this opinion.

Q: Coming to the ODIs, India suffered two middle-order collapses in the first two games. Where do you think India should look back when they gear up for their next ODI series?

Right, it is a major concern. Keeping the World Cup in mind, we definitely need to strengthen that area. They obviously need to resurrect the situation, correct the situation that the Indian team finds themselves in very many times. There are different ways and everyone needs to find one and collectively see which suits the team because this shouldn’t be happening repeatedly. It’s not done that there is a collapse and a lack of clarity around it. 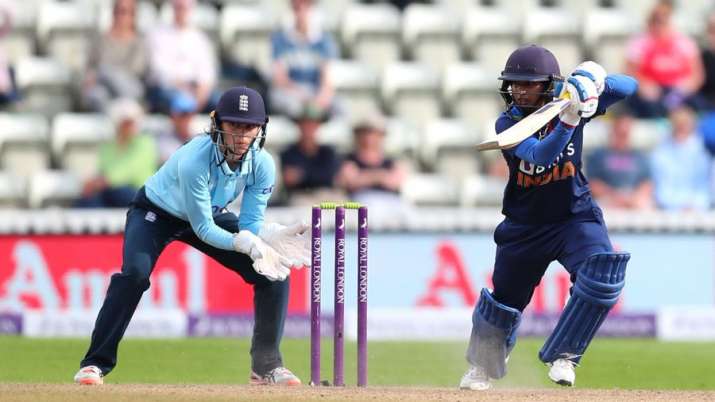 Q: There is always a lot being said about Mithali's strike rate. She replied in style with an impressive show in the final ODI. What is your take?

I don’t know where this debate is coming from. As a captain, the focus should be on the entire team’s performance, not on one player.

Is that strike rate in accordance with what today's cricket is? If yes, I'm fine with it. If not, then things have to be better. If others are not performing the way they are supposed to, as a captain, you need to address that.

Obviously, the strike rate is not what you would expect. But would you pick any other player to replace Mithali Raj for having a strike rate like that? Yes, the team won, but is that a perfect victory, something that you want to take forward? When you’re going into international cricket, looking at the World Cup in New Zealand and going forward, you want to improve as a team. There’s no harm in scoring at a slower strike rate, but then either we look at it as a benchmark or we look at it as a situation.

Obviously, she needs to score. She also knows that.

Q: In ODIs, the two losses in the series were part of their five-match losing streak, all of which came while defending the total. But India have been excellent chasers. Since April 2018, they have won 11 of their 12 games chasing. What went wrong?

India are not defending well then. But in three years, if India are playing only these many matches, then how can a problem even be identified.