Suvendu Adhikari, who was once considered a close aide of Trinamool chief Mamata Banerjee, is likely to reach Delhi on Thursday to meet BJP leadership, including Amit Shah.

Amid reports of him joining the Bharatiya Janata Party (BJP), dissident Trinamool Congress leader Suvendu Adhikari on Wednesday resigned as MLA. Adhikari, who was once considered a close aide of Trinamool chief Mamata Banerjee, is likely to reach Delhi on Thursday to meet BJP leadership, including Amit  Shah.

The BJP, meanwhile, has welcomed Adhikari's decision. "The day Suvendu Adhikari had resigned from the ministerial post, I had told I will be happy if he leaves TMC and we will welcome him. Today, he has resigned from the membership of West Bengal Legislative Assembly and I welcome his decision," BJP vice-president Mukul Roy said.

"Trinamool Congress is collapsing like a house of cards. Everyday someone from the party comes to us to join our party," he added.

The Nandigram MLA resignation has come just days ahead of Union Home Minister Amit Shah's proposed 2-day tour of Bengal later this week. During the visit, the former BJP president is also likely to visit Midnapore district, which is Adhikari's home district and a stronghold.

"I have also heard that Suvendu Adhikari may join the BJP. He is welcome in the party if he wishes to join us. We will give him opportunities to work for the people in Bengal," BJP state unit president Dilip Ghosh had said earlier. 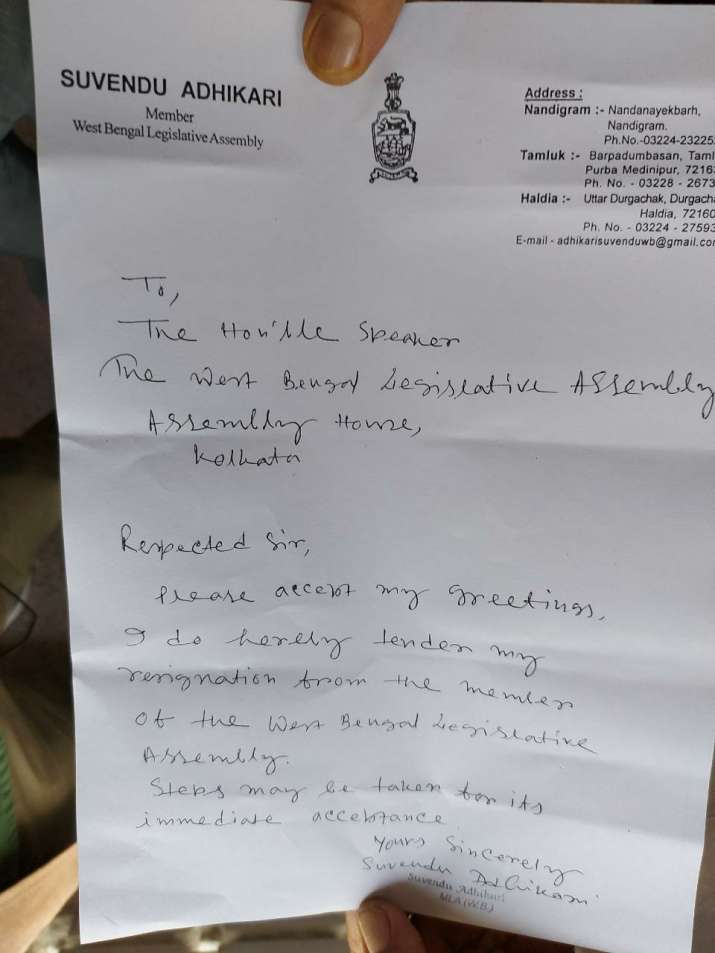 Adhikari had tendered his resignation as minister from the Mamata Banerjee-led state cabinet last month, on November 27. He had also left the chairperson's post of the Hooghly River Bridge Commissioner's (HRBC) two days before that.

Sources said that Adhikari was unhappy with organisational decisions taken by Abhishek Banerjee and political strategist Prashant Kishor. Adhikari and Banerjee were even seen taking potshots indirectly at each other without taking names at recent public meetings in the past.