The "bhoomi pujan" ceremony to begin the construction of the Ram Temple will be held in August first week. Prime Minister Narendra has been invited by Shri Ram Janmabhoomi Teertha Kshetra Trust to lay the foundation stone of the temple on August 5.

The "bhoomi pujan" ceremony to begin the construction of the Ram Temple will be held in August first week. Prime Minister Narendra has been invited by Shri Ram Janmabhoomi Teertha Kshetra Trust to lay the foundation stone of the temple on August 5. Earlier, two dates were being talked about -- August 3 or 5 -- both auspicious dates, based on calculations of movements of stars and planets. However, later, August 5 was finalised.

On Saturday, Uttar Pradesh Chief Minister Yogi Adityanath made a short visit to Ayodhya to review the preparations for the foundation stone laying ceremony for the construction of the Ram Temple. During the visit, the chief minister placed the idols of Laxman, Bharat and Shatrughan on the new 'asans' at the Ram Janmabhoomi temple site. After attending a puja, Adityanath offered prayers at the Hanumangarhi Temple and inspected the stones carved for Ram Temple at Mandir Nirmaan Karyashala.

Meanwhile, Ayodhya is gearing for the much-awaited event. All temples in Ayodhya have been asked to carry out special cleaning of their premises and light lamps on August 4 and 5 to celebrate the beginning of the construction of the grand temple of Lord Ram. The construction of the temple will begin with the ceremony to lay the foundation stone.

"CM Adityanath has asked all temples in Ayodhya to do special cleaning and purification, and light lamps on August 4 and 5 to celebrate the big day," Trilok Nath Pandey, the decree-holder of the Shri Ram Janmabhoomi Teertha Kshetra said. 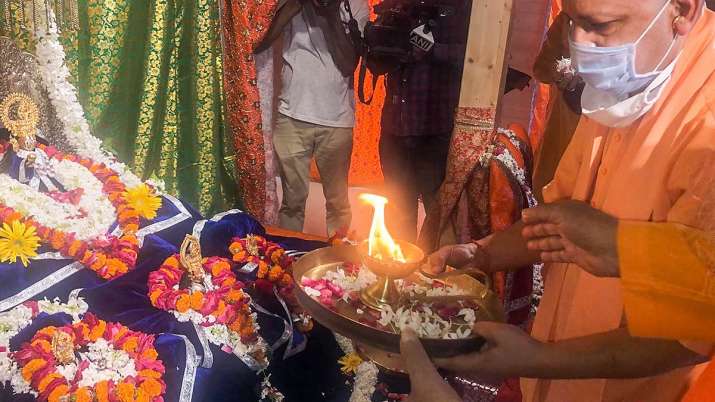 The ceremony is expected to be attended by 200 people. The trust has said that all social distancing norms will be followed at the event.

Soil from the Rashtriya Swayamsevak Sangh (RSS) headquarters has been sent to Ayodhya for the ceremony via courier. According to Govind Shende, the Vidarbha prant pramukh of Vishva Hindu Parishad (VHP), soil from a temple in Ramtek and water from the confluence of five rivers both near Nagpur city, have also been sent for the event. "Earlier, it was decided that soil and water from different places in the country, including the religious places, would be collected and people in thousands would go for the bhoomi pujan of Ram temple in March. However, due to the COVID-19 outbreak it couldn't happen," he said. "Now as August 5 was suddenly fixed as the bhoomi pujan date, we decided to gather the soil and water from the places that we could visit and send it to Ayodhya," he added.

Before the "bhoomi pujan" ceremony, Vedic rituals will be performed by sages from Varanasi as was done during the shifting of the idol of Ram Lalla from the sanctum sanctorum to a temporary structure. Priests in Ayodhya have prepared an elaborate plan for the event.

After a protracted legal tussle, the Supreme Court had on November 9 last year paved the way for the construction of a Ram Temple by a Trust at the disputed site in Ayodhya, and directed  the Centre to allot an alternative five-acre plot to the Sunni Waqf Board for building a new mosque at a "prominent" place in the holy town in Uttar Pradesh. (With PTI inputs)