The 12 rail projects also include a new rail bridge on river Kiul. PM inaugurated the Kiul rail bridge along with an electric locomotive shed in Kiul. Kiul junction is a major stop in the Delhi-Howrah main-rail line and connects several cities in Bihar. Two new railway lines, 5 electrification projects, one Electric Locomotive Shed and 3rd Line Project between Barh-Bakhtiyarpur was also announced.

"Today, new history has been created in the field of rail connectivity in Bihar. The dozen of projects worth Rs 3000 crores including the Kosi Mahasetu and Kiul Bridge launched today will strengthen the rail network in the State," PM Modi said.

These projects are likely to provide massive infra boost and generate employment in the state which has seen thousands of migrants return to their home state during the pandemic.

However, the real BIG announcement of today was the Kosi Rail Mahasetu. A mega rail bridge over Kosi is a long-standing demand of the people in the region. 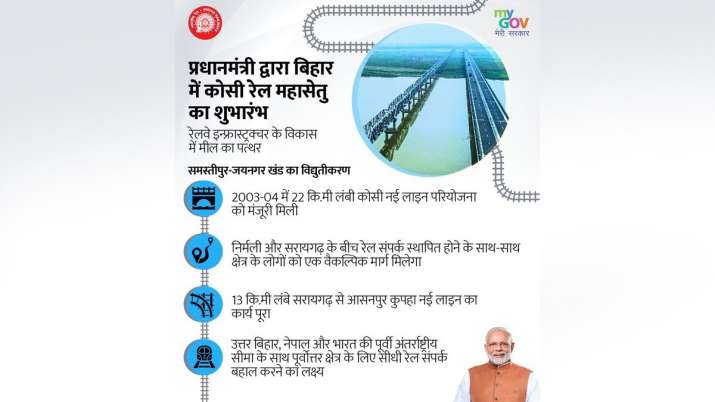 The region has been seeking a bridge for almost 100 years. In 1887, a meter gauge rail link between Nirmali and Bhaptiahi (Saraigarh) was washed away in the Kosi floods. Since then, several attempts to start a new rail-line were stalled due to technical problems arising out of the changing nature of Kosi. Also known as the sorrow of Bihar, Kosi brings devastating floods almost every year and the region is one of the poorest in Bihar.

Elections in Bihar are due later this year. BJP-JDU and LJP are in ruling NDA alliance. RJD is the principal opposition party in the state.