Former President of India Pranab Mukherjee, who was suffering through ill health and undergoing treatment at Delhi's Army Hospital, died on August 31 (Monday), his son Abhijit Mukherjee announced. Mukherjee was a staunch Congressman and also served as Union Minister for Finance, Home between 2004-2012 during UPA-led governments. The former president was admitted to the hospital in Delhi Cantonment on August 10 and was operated the same day for removal of a clot in his brain. He later developed a lung infection. Mukherjee was the 13th president of India from 2012 to 2017.

In order to pay tribute to former President Pranab Mukherjee, a 7-day state mourning will be observed throughout India from 31 August to 6 September, both days inclusive, Government informed.

Tricolour at Parliament lowered to half-mast, funeral in Delhi tomorrow

Pranab Mukherjee, who passed away today at the age of 84, last rites will be conducted on Tuesday (September 1) in Delhi. To pay tribute to the former President, the tricolour at Parliament has been lowered to half-mast.

"India grieves the passing away of Bharat Ratna Shri Pranab Mukherjee. He has left an indelible mark on the development trajectory of our nation. A scholar par excellence, a towering statesman, he was admired across the political spectrum and by all sections of society," PM Modi tweeted.

"I was new to Delhi in 2014. From Day 1, I was blessed to have the guidance, support and blessings of Pranab Mukherjee. I will always cherish my interactions with him. Condolences to his family, friends, admirers and supporters across India. Om Shanti."

"As India’s President, Pranab Mukherjee made Rashtrapati Bhavan even more accessible to common citizens. He made the President’s house a centre of learning, innovation, culture, science and literature. His wise counsel on key policy matters will never be forgotten by me," Prime Minister Modi said. 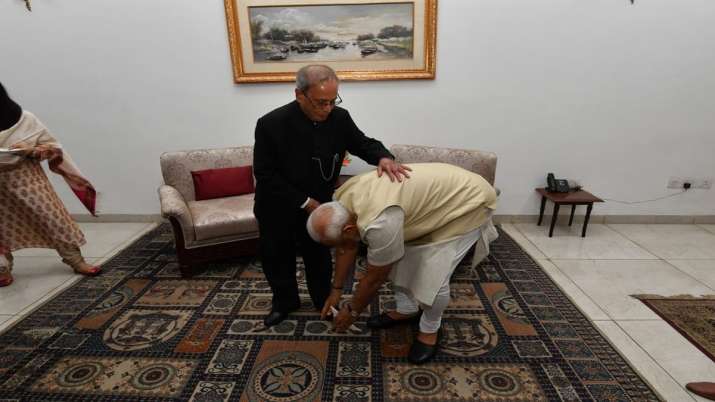 "Sad to hear that former President Shri Pranab Mukherjee is no more. His demise is passing of an era. A colossus in public life, he served Mother India with the spirit of a sage. The nation mourns losing one of its worthiest sons. Condolences to his family, friends & all citizens," President Ram Nath Kovind said while paying tributes to the former President.

"Endowed with perspicacity and wisdom, Bharat Ratna Shri Mukherjee combined tradition and modernity. In his 5 decade long illustrious public life, he remained rooted to the ground irrespective of the exalted offices he held. He endeared himself to people across political spectrum."

"As the First Citizen, he continued to connect with everyone, bringing Rashtrapati Bhavan closer to the people. He opened its gates for public visit. His decision to discontinue the use of the honorific 'His Excellency' was historic."

"Deeply anguished on the passing away of Pranab Mukherjee": Amit Shah

"Deeply anguished on the passing away of former President of India, Bharat Ratna Shri Pranab Mukherjee ji. He was a vastly experienced leader who served the nation with utmost devotion. Pranab da’s distinguished career is a matter of great pride for the entire country,"

"Pranab Da's life will always be cherished for his impeccable service and indelible contribution to our motherland. His demise has left a huge void in Indian polity. My sincerest condolences are with his family and followers on this irreparable loss. Om Shanti Shanti Shanti,"

"With great sadness, the nation receives the news of the unfortunate demise of our former President Shri Pranab Mukherjee. I join the country in paying homage to him. My deepest condolences to the bereaved family and friends," Rahul Gandhi said while paying tribute to the former President.

The demise of Pranab Mukherjee, former President of India, is an end to a political era... still remembers what Pranab Mukherjee said during celebrations of Aap Ki Adalat's 21st anniversary — "Don't change your role. You be the public prosecutor for the people of India. Main unki baat hamesha yaad rakhunga..." 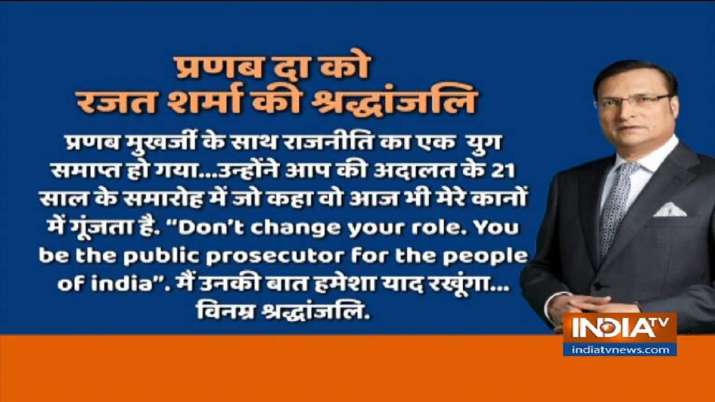 "It is with deep sorrow I write this. Bharat Ratna Pranab Mukherjee has left us. An era has ended. For decades he was a father figure. From my first win as MP, to being my senior Cabinet colleague, to his becoming President while I was CM..."

"So many memories.A visit to Delhi without Pranabda is unimaginable. He is a legend in all subjects from politics to economics. Will be forever grateful. Shall miss him immensely. My condolences to Abhijit & Sharmistha."

"Today the country has lost one of its finest sons Bharat Ratna Shri Pranab Mukherjee. On one of the occasions when Pranab Da was the Chief Guest for the Teachers Day ceremony in Vigyan Bhawan, I gave him a slate as a gift and he liked it very much."

"A chapter of Indian politics came to an end (with the demise of former President Pranab Mukherjee). He always put the country above the party politics. I pay my obeisance to him on behalf of the people of Madhya Pradesh."

"Extremely sad to hear about the demise of our former President Pranab Mukherjee Ji. He was an elder brother to many of us who always gave ears to what others said irrespective of their party affiliation. He will be sorely missed. May his soul rest in peace!"

"I express my deepest regret on the death of former president Pranab Mukherjee. He was a soft-spoken person who gave respect to everybody. He was a personality who was above party politics."

"Gujarat will always remember his long political life and service to the country."

"The unfortunate demise of Shri Pranab Mukherjee is a tragic loss to the nation. His invaluable contributions to the nation's progress in over 5 decades of exemplary service will always be remembered with great pride. My thoughts & prayers are with the grieving family."

"Sad to hear the passing away of Former President of India Bharat Ratna Shri Pranab Mukherjee Sir. You will be missed by all Indians across the world for the tireless service and dedicated work for our beloved motherland. Condolences to the family of Pranab da."