Earlier on Friday, Yediyurappa had met Prime Minister Narendra Modi amid speculation about possible changes in the state leadership and the Cabinet.

Karnataka Chief Minister BS Yediyurappa on Saturday offered to resign on health grounds. According to reports, Prime Minister Narendra Modi has accepted the resignation of the Karnataka chief minister. Yediyurappa is very likely to resign on July 26, reports said. The Karnataka chief minister met BJP chief JP Nadda today and said he has been told to strengthen the party and bring it back to power in the state. The chief minister has said that he will also meet Union ministers Amit Shah and Rajnath Singh.

"We discussed about the development of the party in the state. He asked me to give special emphasis on bringing the BJP back to power in Karnataka. The same was told by the prime minister also. A detailed discussion happened," Yediyurappa said after meeting Nadda.

He said that these are the responsibilities the BJP chief has given to him. 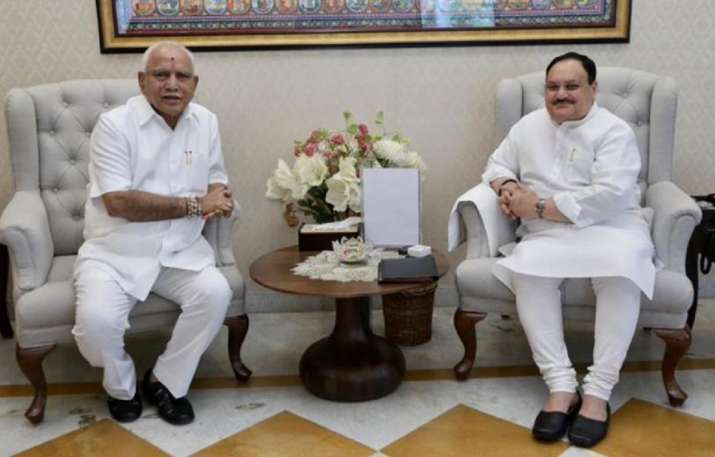 "Home Minister Amit Shah said that'll win 100% in UP and in Karnataka, we have a bright future," the Karnataka chief minister said.

"Shah asked to take the responsibility of strengthening the party in Karnataka. I assure you I will not step back and will take complete responsibility," Yediyurappa said.

On Friday, Yediyurappa had met Prime Minister Narendra Modi and discussed pending state works, including the Mekedatu project across river Cauvery. The meeting came at a time political circles are abuzz with speculations of Yediyurappa being replaced as the chief minister.

Repeated open remarks by some disgruntled leaders within the Karnataka BJP targeting him and his family with accusations of corruption and interference in the administration have embarrassed the party and the government, despite warnings of disciplinary action by the leadership.

Another section of the party is demanding the replacement of Yediyurappa (79) citing his age and the need of projecting a new CM face ahead of assembly polls in 2023, sources had said.

On a possible cabinet rejig, Yediyurappa, before the meeting with the prime minister, had said, "I will tell you if there is any such discussion with (party) seniors over the restructuring or expansion of the Cabinet."

An official statement issued after the Friday meeting had said the chief minister discussed various state issues with the prime minister.

Meanwhile, Yediyurappa on Saturday dismissed rumours about his resignation. "Not at all...," the Karnataka chief minister was quoted by PTI as saying. "Yesterday I met the PM, we discussed the development of the state and I will come back again in August...there is no value of such news," asserted the chief minister, who will return to Bengaluru on Saturday after meeting the BJP chief and the Union ministers.