A day after a portion of the Nanda Devi glacier possibly burst through its banks at Joshimath, triggering an avalanche and a deluge that rippled through the Alaknanda river system in the upper reaches of the Himalayas, multiple agencies coordinated efforts to search for survivors.

Three more bodies of the more than 140 missing after the glacier burst in Uttarakhand’s Chamoli district have been recovered, taking the death toll to 10, officials said on Monday, as massive efforts were underway to rescue at least 30 workers trapped in a tunnel at a power project site. A day after a portion of the Nanda Devi glacier possibly burst through its banks at Joshimath, triggering an avalanche and a deluge that rippled through the Alaknanda river system in the upper reaches of the Himalayas, multiple agencies coordinated efforts to search for survivors. Some houses were swept away and two power projects – NTPC’s Tapovan-Vishnugad hydel project and the Rishi Ganga Hydel Project – were extensively damaged with scores of labourers caught in tunnels as the waters came rushing in. 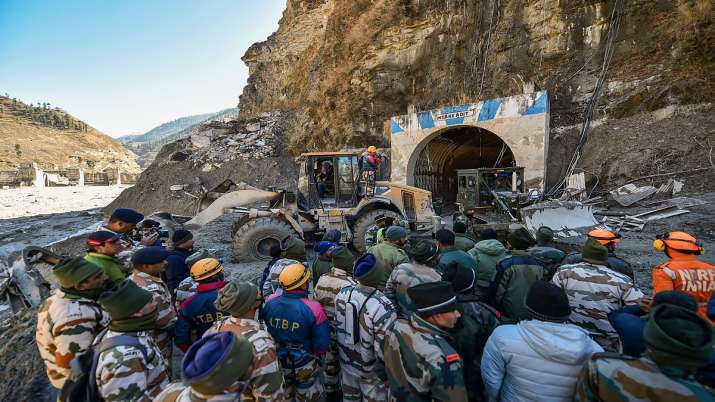 Two villages, including Raini, are cut off and essentials are being supplied to them.


“A total of 153 people were missing from the two hydel projects at Raini and Tapovan… of which 10 bodies have been recovered while 143 are still missing," Kumar said, describing Sunday’s disaster as “one-time”. 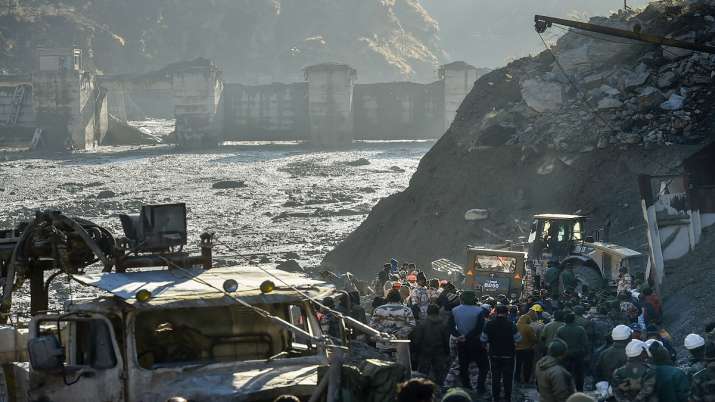 The entire landscape of the ecologically fragile area was coloured a sandy grey, many structures swept away and buried under piles of silt.

"Our teams worked overnight to rescue about 30 workers who are trapped in the tunnel. Specialised equipment for such operations has been deployed. We are hopeful we will able to rescue everyone," ITBP spokesperson Vivek Kumar Pandey told PTI in Delhi. 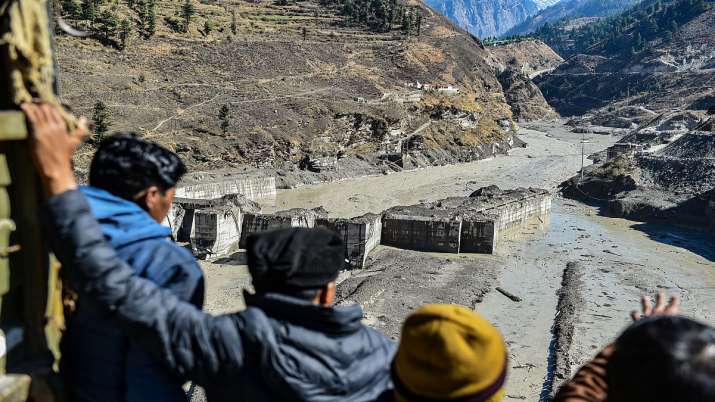 Another official said 34 people are estimated to be trapped in the 'head race tunnel' or HRT.

ITBP Additional Director General (Western Command) M S Rawat also reached the spot Monday morning to take stock of the situation and interacted with officials and others working at the site.

In a video provided by the force, a team of senior officials was seen analysing the tunnel's map to find the best way of approach.

The tunnel has only one entry, an official said.

Teams of the NDRF had reached late Sunday night and were seen using shovels to clear the tunnel's approach. The force also used canine squads to help rescuers detect traces of life under the debris.

More teams have been sent to the site on Mi-17 helicopters that landed at the helipad in Joshimath, NDRF chief S N Pradhan said in a Twitter post.

With no clarity on what led to the disaster and experts pointing to climate change, scientists also headed to Chamoli to understand what had happened.

Some teams from the Army, including from the Medical Corps, have also reached the disaster spot, a senior official supervising the operation said. 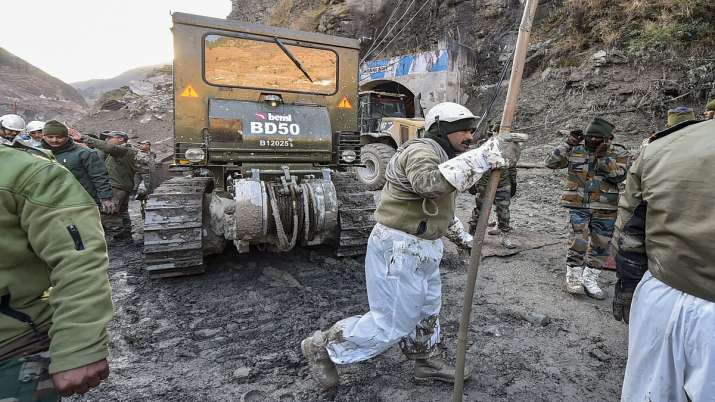 Three of them have been admitted to the ITBP hospital at Joshimath, nearly 25 km from the Tapovan power project site, as they were feeling uneasy, the officials said. They are stable now.

As rescue efforts continued on a war footing, UN Secretary General Antonio Guterres said the United Nations stands ready to contribute to the ongoing rescue and assistance efforts in Uttarakhand if necessary.

“The Secretary-General is deeply saddened by the reported loss of life and dozens missing following the glacier burst and subsequent flooding in Uttarakhand state, India, on Sunday,” said Stéphane Dujarric, spokesperson for Guterres.

“The Secretary-General expresses his deep condolences to the families of the victims and to the people and Government of India. The United Nations stands ready to contribute to ongoing rescue and assistance efforts if necessary,” he added in a statement.

Expressing solidarity with those affected by the glacier burst, Congress leader Rahul Gandhi said the whole country is with the people of the state and it is important that relief operations are not hindered in the next few days.