Tej Pratap out of RJD's list of star campaigners for by-elections, Lalu will campaign too

RJD has released a list of 20 star campaigners for the by-elections to be held for Tarapur and Kusheshwarsthan assembly seats.

Rashtriya Janata Dal (RJD) has released the list of star campaigners for the by-elections to be held in two seats. Notably, Tej Pratap Yadav, who has been at loggerheads with brother Tejashwi, has failed to find a mention in the list.

RJD has released a list of 20 star campaigners for the by-elections to be held for Tarapur and Kusheshwarsthan assembly seats. 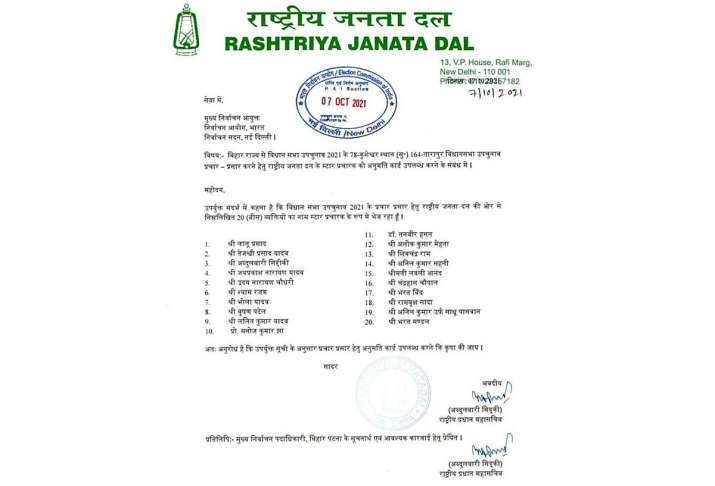 In this by-election, RJD supremo Lalu Yadav will also campaign along with his younger son Tejashwi Yadav. Both will also attend every election meeting.

Interestingly, RJD leader from Hajipur Shivanand Tiwari on Wednesday said that Tej Pratap Yadav is not in the party. He had started his own outfit under the symbol of RJD which was opposed by party leaders.

Meanwhile, amid the ongoing rift between the two sons of Lalu Prasad, the elder Tej Pratap Yadav on Thursday met Congress leader and former MLA Ashok Ram. This is probably for the first time that a leader from the Lalu Prasad family has set aside his party, Rashtriya Janata Dal (RJD) by meeting and extending support to another party as bypolls near.

ALSO READ: Tej Pratap Yadav not in RJD, he started his own outfit: Shivanand Tiwari