The newly-appointed Punjab Congress chief along with his four working presidents is going to take formal charge on July 23, Friday.

Sidhu has written a second letter to CM, requesting him 'to come & bless the new team of PCC on the occasion of our taking charge' in Chandigarh on Friday. The letter has been signed by 56 Congress MLAs. AICC Punjab in-charge Harish Rawat has also been invited. 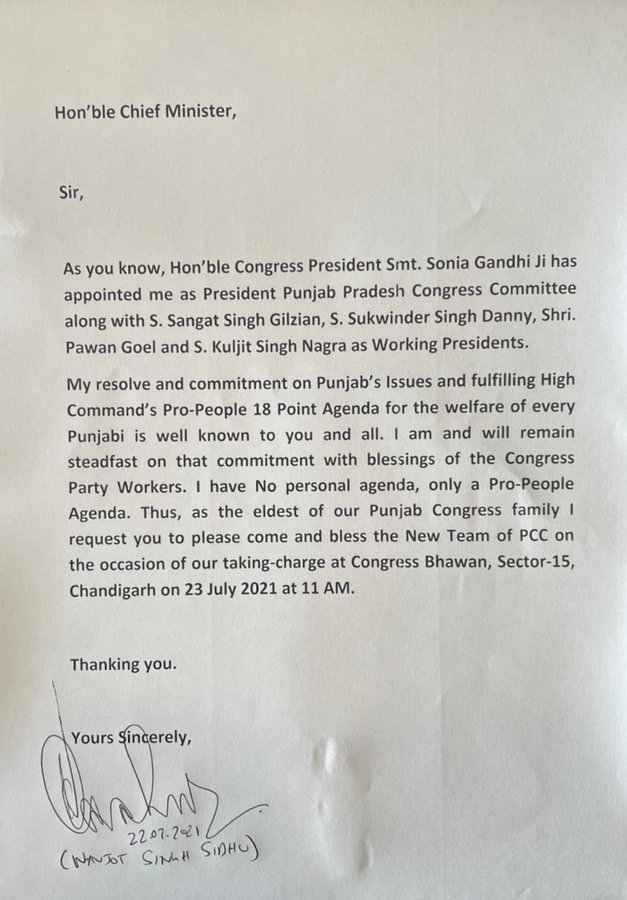 Meanwhile, Amarinder Singh has invited all Congress MLAs, MPs and senior party functionaries from the state for tea at 10 am on Friday. They will all then go to Punjab Congress Bhawan together from there for the installation of the new PPCC team, media Advisor to the Punjab CM said.

Punjab Congress working president Kuljit Singh Nagra in this regard said, "Harish Rawat has confirmed (that he'll come), as soon as other leaders of AICC give confirmation, we'll tell you."

Confirming his attendance, Harish Rawat said, "Under the leadership of Captain Amarinder Singh, Congress will unitedly welcome the new president on Friday."

Notably, Amarinder Singh has neither congratulated nor met Navjot Singh Sidhu - even after four days of the cricketer-turned-politician's appointment as Congress state chief.

Sidhu and Amarinder Singh have been at loggerheads for the past some time, with the Amritsar (East) MLA recently attacking the CM over the desecration cases.

The chief minister was also averse to his appointment as the state Congress chief. After Sidhu's elevation, the CM had said that he won’t meet him until the cricketer-turned-politician apologises for his "derogatory" tweets against him.