Stay tuned to this space as we bring to you live and latest updates and developments on the flood and rain-ravaged areas in India.

With the rains relenting after battering the Southern states over the past few days, rescue and relief works are on in full swing in flood-ravaged districts of Kerala and Karnataka, even as the combined toll rose to 131 on Monday. Stay tuned to this space as we bring to you latest updates and developments on the Monsoon season in India.

Here are the top developments in the flood-ravaged parts of India: 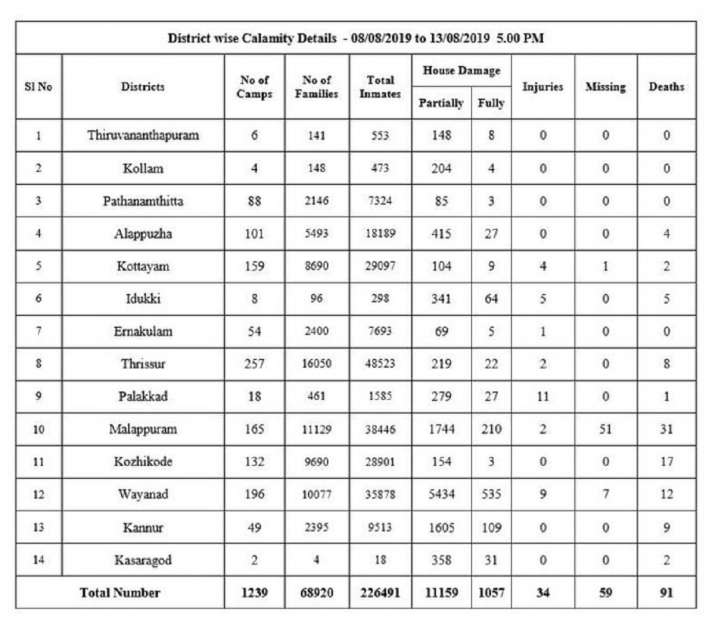 Kerala: Roads water-logged in Kochi after heavy rainfall in the city. pic.twitter.com/VevVkzQbgv

Met department has predicted heavy to very heavy showers at isolated places in the hilly areas in Pune, Kolhapur and Satara districts of Maharashtra on Wednesday. The forecast released on Tuesday afternoon is set to increase the worries of the administration as Kolhapur and Sangli districts in western Maharashtra are still struggling to emerge from the massive floods that had swamped the region.

The proposal would be forwarded to the Centre soon, he said and added, till then the state would use its own corpus for the purpose.

"A committee of experts will be set up shortly to recommend measures if the state again witnessed the kind of rainfall it received in the last four days," Fadnavis said.

On the Rs 4,708 crore relief measures, he said Rs 300 crore would be spent on helping families of flood victims, Rs 25 crore on relief works, Rs 27 crore on food, medicine and clothing of nearly 4.75 lakh people taking shelter at temporary camps, and around Rs 70 crore for the cleanup operation.

Rs 2,088 crore will be given to farmers towards crop damages, Rs 30 crore for loss of livestock, Rs 11 crore to fishermen, Rs 222 crore for repair of damaged houses, Rs 876 crore for restoring 147 big and small roads and 66 bridges.

Rs 300 crore will be disbursed to small traders and businessmen for the losses suffered due to the flood. The Rs 2,105 crore would be spent in other regions, said the chief minister.

A cabinet sub-committee, headed by Fadnavis, will monitor the operation.

At least eight people were killed due to the heavy rain and floods in Odisha, a relief official said on Tuesday

The deaths were reported from the districts of Nabarangpur, Kalahandi, Kandhamal, Koraput and Malkangiri, according to Special Relief Commissioner (SRC) Bishnupada Sethi.

Sethi said Odisha has recorded an average rainfall of over 100 mm in the last 24 hours with Karlamunda block of Kalahandi district registering the maximum rainfall of 608 mm.

A red alert has been issued for three districts in Kerala on Tuesday as extremely heavy rains are expected as the flood-hit northern parts of the state were slowly limping back to normalcy and the toll climbed to 88.

The red alert has been sounded in Alappuzha, Ernakulam and Idukki on Tuesday and in northern districts of Malappuram and Kozhikode on Wednesday, IMD sources said adding over 20 cms of rains are expected in these districts.

Due to the strengthening of low pressure in the Bay of Bengal, extremely heavy rains are expected to lash the several parts of the state, Director of Indian Meteorological Department (IMD), Thiruvananthapuram, K Santosh said.

Incessant rain triggered a flood-like situation in parts of Odisha on Tuesday, while the formation of two back-to-back low pressure areas have claimed at least eight lives in the last fortnight.

He also slammed DMK President and Tamil Nadu Leader of Opposition, MK Stalin, for giving "false information" that no state minister had visited the district to oversee rescue and relief work.

The India Meterological Department (IMD) has issued a warning for the next 48 hrs (August 13 and 14) of heavy rainfall due to a low pressure area in the Bay of Bengal.

A low-pressure area lies over the Northwest Bay of Bengal and adjoining West Bengal Bangladesh coasts. It is likely to move west-north westwards.

Fishermen along the Maharashtra and Goa coast have been warned to not venture into the sea for the next 48 hours as strong winds with speed reaching 45-55 kmph gusting to 65 kmph are likely to prevail along with rough sea conditions.

All teams of NDRF in Kolhapur will remain deployed. There are SEVEN teams deployed there.

Out of 17 teams of NDRF deployed in Sangli, two were withdrawn on August 12. Seven will be withdrawn on Tuesday. And eight teams will remain deployed.

In Kerala, authorities are scouring landslide-hit Kavalappara and Puthumala in Malappuram and Wayanad districts, the worst hit, to trace over 50 people missing since August 8.

The state's northern districts of Malappuram, Wayanad and Kozhikode and Idukki in central Kerala were the worst hit in the torrential rains.

Malappuram was rocked by a series of landslips triggered by heavy rain since August 8 at Kavalappara and Kottakunnu in which 27 people have died.

In neighbouring Wayanad, which was also rocked by a massive landslide at Puthumala, 12 people have lost their lives and seven are still missing.

With the recovery of more bodies, including 27 from Malappuram, 17 from Kozhikode and 12 from Wayanad since August 8, the toll has gone up to 83 authorities said on Monday.

There is no 'red alert' for any of the 14 districts on Tuesday, but "orange alert" has been issued for six districts.

"It is a tragedy not only for Wayanad, but for Kerala and also some southern states. This is not only a Wayanad issue, this is a Kerala issue, this is a Karnataka issue. I think the Central government needs to pay attention and aggressively support the people of these states," the

Congress leader told reporters at Kalpetta after attending a review meeting with government officials on the flood situation in his constituency.

Chief Minister Pinarayi Vijayan directed district collectors to ensure all necessary facilities for people living in relief camps and sanitation drive is being conducted in a proper manner in flood-hit places.

Steps should be taken to restore power supply and drinking water distribution in rain-hit areas, he said.

Vijayan will visit Malappuram and Wayanad districts on Tuesday.

According to an IMD update, heavy rains are likely in the next two days in south Kerala.

In neighbouring Karnataka, according to official information, the death toll was 48 till Monday evening, while 12 were still missing.

A total of 6,73,559 people have been evacuated and rescued, and 1,224 relief camps have been opened where 3,93,956 are taking shelter. Chief Minister B S Yediyurappa announced an assistance of Rs 5 lakh each to those who have lost their houses in the floods and landslides, to take up construction work.

The chief minister has also announced Rs 1 lakh to those whose houses have been damaged, to take up repair work, and Rs 5,000 monthly to those staying in rental accommodation till their houses are ready.

With the situation improving, search is on for those who have gone missing and efforts are being made to reach out to those who need to be evacuated.

A total of 2,694 villages in 86 taluks of 17 districts in Karnataka have been affected due to floods and rains.

Yediyurappa, who is touring flood-hit areas of Dakshina Kannada and Mysuru districts, expressed hope that the situation in flood-hit parts will be back to normal in four to six days as there had been a let-up in the rains. He will tour Shivamogga and neighbouring areas on Tuesday.

Meanwhile, the state government has requested the Centre to immediately release Rs 3,000 crore.

Former prime minister HD Deve Gowda urged Prime Minister Narendra Modi to release Rs 5,000 crore as interim relief to the state and to notify the floods as a "national calamity."

Officials said a rescue boat consisting of one fire department personnel, three from civil defence and one from NDRF team capsized in raging waters near Virupapur gadde in Koppal district, but all occupants were rescued.

All the five were wearing life jackets and one of them was rescued by an IAF helicopter, they said.