A teenager was killed and 32 others were injured Thursday in a grenade attack by suspected terrorists in the crowded general bus stand area in the heart of Jammu.

A grenade attack took place at Jammu bus stand on Thursday morning. One person died and 32 injured were admitted to hospital. The area was cordoned off by security personnel. A teenager was killed and 32 others were injured in a grenade attack by suspected terrorists in the crowded general bus stand area in the heart of Jammu.

The police suspect the involvement of militant group Hizbul Mujahideen and have apprehended a youth from Anantnafor questioning.

The person who threw the grenade at the Jammu bus stand earlier today, has been arrested, J&K DGP Dilbagh Singh told media in the afternoon.

"Teams were constituted to work on leads, CCTV camera footage examined, based on oral testimony of witnesses we were able to identify a suspect. He was detained, his name is Yasir Bhatt, he has confessed to the crime," J&K Police's Manish K Sinha told media at a presser.

J&K Governor Satya Pal Malik has condemned the grenade attack at the bus stand in Jammu district. He has announced an ex-gratia of Rs 5 lakh each to the next of the kin of the deceased and Rs 20,000  each to those injured in the incident.

A parked bus of the state road transport corporation (SRTC) suffered extensive damage in the blast which caused panic among the people.

"Whenever there is heightened state of alert, we strengthen checking and frisking but there is always a possibility of someone slipping through and this one seems to be a case like that," the IGP said.

"Obviously the intention is always to disturb the communal harmony and peace," he said and requested the people to maintain calm. 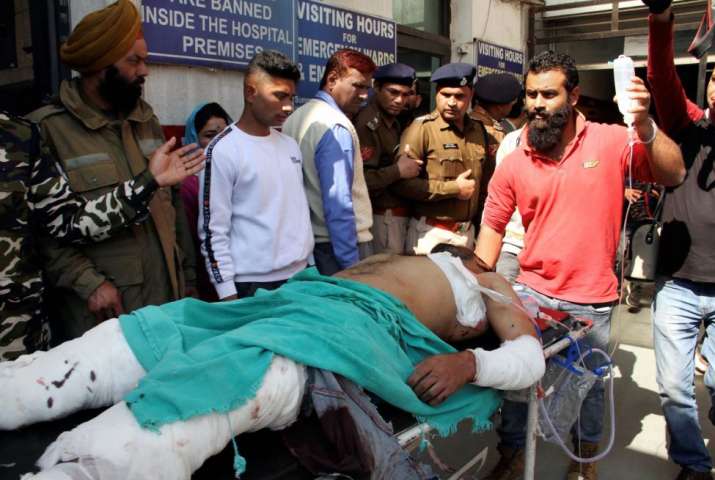 The IGP said the police is collecting the evidence and "we are sure to hunt him down (the attacker)."

Immediately after the explosion, people ran to safety and later as the situation returned to normal evacuated the injured to the hospital.

Police parties along with sniffer dogs and forensic experts rushed to the spot and launched a search operation to nab the attacker, officials said, adding the operation was still going on when last reports were received.

However, no one was arrested in connection with the blast so far, they said.

Earlier on December 28-29 last year, suspected terrorists carried out a grenade attack on the bus stand with the intention to target the local police station building, an attack which took place seven months after another grenade attack along the B C Road left two policemen and a civilian injured on May 24, 2018.