Pongal 2020: Decorate your house with these beautiful kolam, rangoli designs

Kolam, Rangoli designs for your home this Pongal.

Pongal is the thanksgiving for the year's harvest. Celebrated in South Indian states, Pongal marks the beginning of the harvest season. The four-days festival is celebrated with zeal and enthusiasm in countries with Tamil diaspore such as Sri Lanka, Mauritius, South Africa, Singapore and Malaysia. This year the festival will begin on January 15 and end on January 18.

Prasad is prepared on the second day of the festival and offered to the Sun God. A dish is prepared with rice, milk, jaggery, ghee, raisins and cashews, and this dish is known as 'Pongal'. Each day has its own significance and is celebrated in a unique way.

The first day of Pongal is dedicated to God of Rain, Lord Indra. It is called Bhogi. Old and redundant things are thrown. The second day of Pongal is known as 'Thai Pongal' on which prasadam is offered to Sun God. Rangolis, kolams and special dishes are prepared in every house.

On 'Mattu Pongal', the third day, cows are worshipped. They are decorated with garlands and bells. This day marks their contribution in the production of crops. On Kaanum (or Kanu) Pongal, the leftover Pongal dish along with betel nuts, betel leaves and sugarcane are kept in the open on a turmeric leaf. Women also perform a special ritual for the prosperity of their brothers.

People offer prayers in the morning and make kolams and rangolis. Traditional delicacies such as ven pongal and pulliyogare are prepared.

Just like Diwali, Pongal celebration is incomplete without kolams or rangolis. Rangoli or Kolam can be made using flowers, leaves, colors and rice flour. Kolam forms an important part of home decor during the Pongal festivities. Here are some of the Kolam designs for your beautiful home this Pongal. 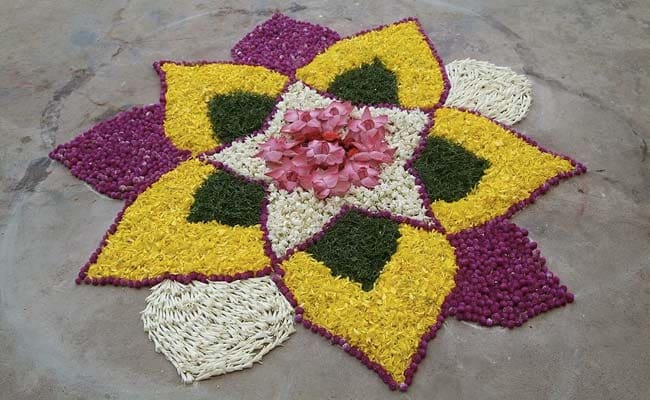 A post shared by FB Page Kolam.shanthiSridharan (@kolam.shanthisridharan) on Jan 8, 2018 at 8:33pm PST