Kolkata--the city of joy, is all set to welcome India's first 'underwater' metro service. The metro line, which is also the world's cheapest metro services will begin in Kolkata from this week after the partial rollout of the East-West Metro service on February 13.

Kolkata--the city of joy, is all set to welcome India's first 'underwater' metro service. The metro line, which is also the world's cheapest metro services will begin in Kolkata from this week after the partial rollout of the East-West Metro service on February 13. As of now, Kolkata's Metro service caters to the North-South route, stretching from Dum Dum to Garia. The city will now get the East-West Metro, which happens to be the second Metro line in Kolkata after 1984. It is particularly special as a portion of the East-West Metro will run underwater. The new Metro line will connect Salt Lake and Howrah and is expected to be in business by 2021. West Bengal's ruling Trinamool Congress on Thursday decided to protest against the denial of invitation to Chief Minister Mamata Banerjee for the inauguration of the East-West Metro corridor with a senior party MP and an MLA deciding to boycott the function. Senior TMC MP Kakoli Ghosh Dastidar and MLA Sujit Bose have decided not to attend the programme.

Railway Minister Piyush Goyal will flag off the first train under East-West Metro service from Salt Lake on February 13 and the commercial run will start from February 14. 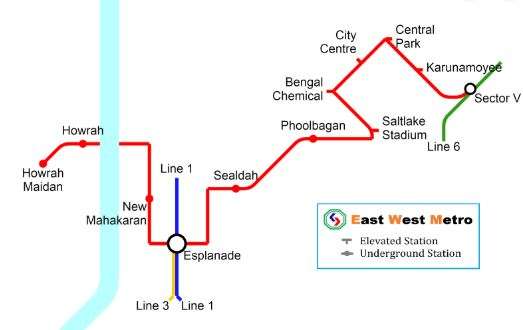 Out of all six, the terminal of Sector V is the biggest. The station has the provision to add two more floors for commercial use. It has a huge parking lot that can accommodate more than 100 cars.

Pros- A little walk will offer commuters the quickest, hassle-free to Sector V from Bypass and it will also be the cheapest option.

Cons- No traditional transport available here, not even a bus route. Walking is the only option here.

It is the only station with five entry-exit points. It is likely that the station will have huge footfall since it is next to city and international bus depot.

Pros- Location wise, this station is the best in Salt Lake. It offers a connection with virtually every section of the satellite city.

Cons- Over-crowding is an issue.

It is the only single-storey station where the concourse and the platform are on the same level. This station has the best and the largest mural.

Pros- If you are heading to government offices from Bypass, this station will be best. The station also has a strong auto and bus network.

Cons- Locals will avoid this station

This station is the smallest of the six elevated stations. It doesn't have approach corridors.

Pros: Its location makes it a good commute option for locals. The station is well-connected by auto and rickshaws.

Cons: The residents have petitioned to realign the auto and rickshaw routes

The station has been given only partial nod. The fourth entry-exit will have to be built in a year.

Pros: The location is on Bypass which will help commuters. Kadapara offers auto and rickshaw options

Cons: Police wants the commuters to use the underpass.

It is currently a terminal station and will be the last elevated station when services are extended.

Cons: Jaywalking can be dangerous