Sonam Kapoor is a protective elder sister to Janhvi Kapoor and she proves it yet again.

Sonam Kapoor and Katrina Kaif are quite different persons. The two Bollywood divas who are style goddesses as well are actually poles apart. While Katrina prefers to stay away from headlines by being neutral in her opinions, Sonam, on the other hand, doesn't hesitate from calling a spade a spade. The Neerja actress never shies away from sharing her opinions on social media. Recently, Sonam took a jibe at Katrina Kaif for her comment on sister Janhvi Kapoor's gym shorts.

For unversed, Katrina in a chat show expressed her concern about ''very, very short gym shorts'' of Janhvi. When asked to name a celebrity who goes OTT (over-the-top) with their gym/workout outfits. She took Janhvi's name, saying, “Not OTT, but I am concerned about the very, very short shorts that Janhvi wears! She comes to my gym as well, so we, often are together in the gym. I just worry about her sometimes.”

This didn't go down well with Sonam, who is a protective elder sister to Janhvi. In a cryptic post, Sonam shared a picture of Janhvi's gym look and wrote, ''She also wears regular clothes and rocks it.”  In the photo, Dhadak actress is seen in white top and denim shorts. 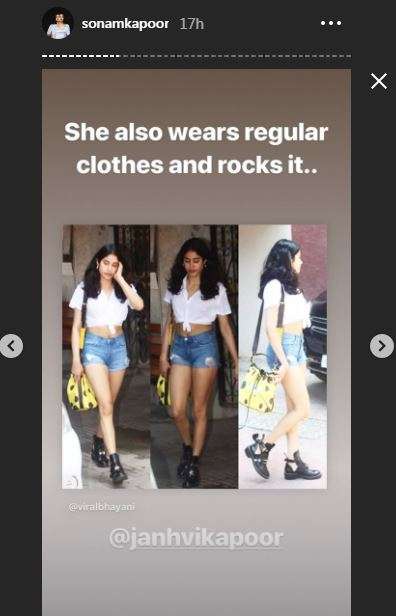 On a related note, Janhvi Kapoor, who made her debut with Shashank Khaitan's Dhadak in 2018 is currently shooting for Kargil Girl, which is a biopic on Indian Air Force fighter pilot Gunjan Saxena. She will also be seen in Karan Johar's period drama Takht. Meanwhile, Sonam Kapoor will next be seen in The Zoya Factor whereas Katrina is gearing up for the release of Salman Khan starrer Bharat.