Shah Rukh Khan's daughter Suhana Khan celebrated Halloween in New York with her close friends. The pictures from the party have surfaced on the Internet. This marked Suhana's first social media appearance after her brother Aryan Khan was granted bail. He was arrested in a case pertaining to the alleged seizure of banned drugs aboard a cruise ship in Mumbai.

Shah Rukh Khan’s daughter Suhana Khan, who is currently in New York, celebrated Halloween with her friends. Suhana's close friend Priyanka took to Instagram and shared a few pictures from inside the celebrations. Meanhwile, this is Suhana's first appearance on social media as her elder brother, Aryan Khan, was arrested in a drug seizure case in Mumbai. Sharing the pictures she wrote, "got a pocketful of sunshine!"

In a picture, Suhana can be seen wearing a baby blue outfit with a halter neck as she hugs her friend Priyanka. Their other friend, Raina, was also in the frame. 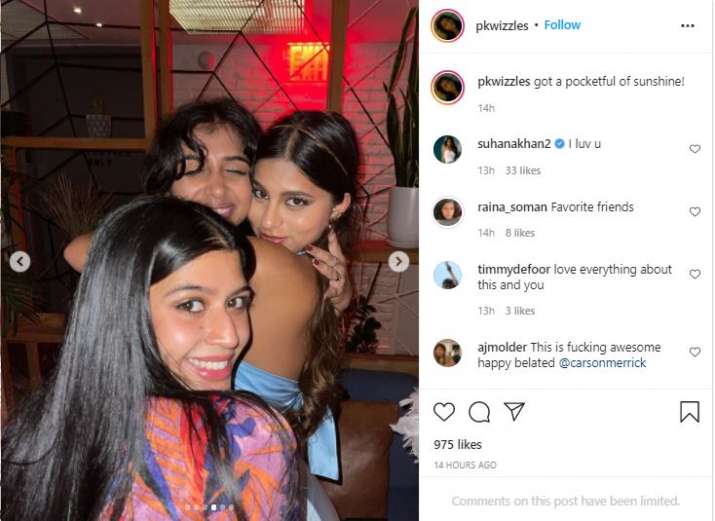 Reacting to the picture in the comments sections, Suhana wrote, "I luv u."

On Thursday (October 28) when Aryan was granted bail by the Bombay High Court, Suhana took to Instagram and shared a collage of black-and-white pictures from her and Aryan's childhood along with Shah Rukh Khan.

She also wished her best friend Ananya Panday on her birthday yesterday (October 31) in her Instagram stories. Sharing their childhood picture she wrote, "Happy Birthday, I love you to pieces." 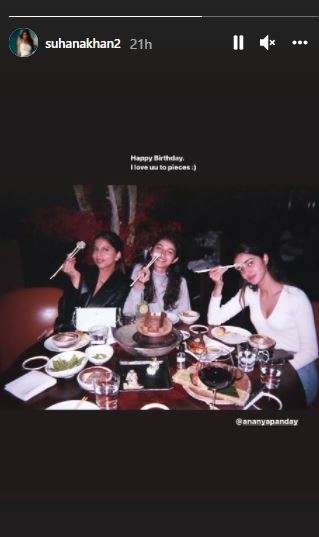 For the unversed, Aryan Khan, Arbaaz Merchantt, Munmun Dhamecha and others were arrested by the NCB on October 3 and booked under relevant sections of the Narcotics Drugs and Psychotropic Substances Act (NDPS) for possession, consumption, sale/purchase of banned drugs, conspiracy and abetment. An NCB team busted an alleged drugs party on the Cordelia Cruise ship which was on its way to Goa at mid-sea on October 2.

On a related note, Bollywood actress Ananya Panday's name has also surfaced in certain WhatsApp chats that were presented by the probing agency during the investigation. So far, the actress has appeared for questioning before NCB twice. She was supposed to be interrogated for the third time but due to personal commitments, she could not appear to record her statement. Fresh summons will be issued to Ananya by the NCB.