Kangana Ranaut posted one of her looks from "Dhaakad" on her Instagram story and wrote: "Making of the most vicious of them all 'Agent Agni' with my dream team."

Bollywood actress Kangana Ranaut has started shooting for her film "Dhaakad" in Budapest and shared a glimpse of her look on social media on Sunday. Kangana posted one of her looks from "Dhaakad" on her Instagram story and wrote: "Making of the most vicious of them all 'Agent Agni' with my dream team."

Kangana will be seen as "Agent Agni" in her upcoming movie. The film's first schedule was shot in Madhya Pradesh. 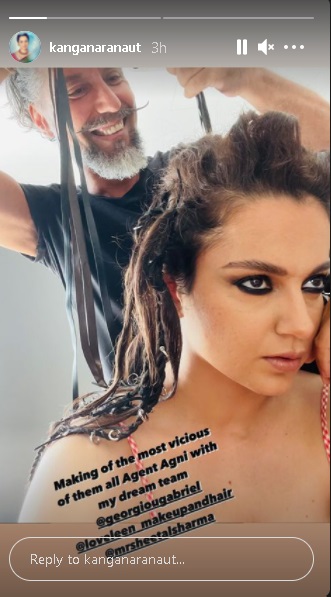 Earlier, she had shared glimpses of her fitness regime for fans on Thursday. The actor posted a picture on her Instagram Stories, in which she could be seen raising the fitness quotient and captioned it "Dhaakad level fitness".

The actress also took to Instagram to share a series of pictures from the Hungarian Capital city. In the pictures, Kangana is seen posing on the streets of the gorgeous city. Dressed in a floral short dress, she is seen posing with a bouquet of flowers.

She left a note of sarcasm in the first post: "Decided to play a Bolly Bimbo today and shoot typical insta style pics for my highly intelligent insta family," she wrote.

Dhaakad, touted to be a spy thriller, is being directed by Razneesh Razy Ghai and Kangana Ranaut will be seen playing the role of an officer named Agent Agni in the movie. The film's first schedule was shot in Madhya Pradesh.

Kangana Ranaut starrer Dhaakad is being directed by Razneesh Razy Ghai. The film, which is based on issues like child trafficking and crimes against women, will also star Divya Dutta and Arjun Rampal in pivotal roles.

Days after the court battle, Kangana Ranaut received her fresh passport a few days back. The 'Queen' actor had informed the same on her Instagram handle. She posted a picture with the 'Dhaakad's director Razneesh Ghai and captioned it as, "Got my passport.... Thanks to everyone for their concern and best wishes ... Chief I will be with you all soon @razylivingtheblues #Dhaakad".

Meanwhile, Kangana besides 'Dhaakad', will also be seen in 'Thalaivi', a biopic on actor-turned-politician Jayalalithaa. 'Tejas', 'Manikarnika Returns: The Legend Of Didda' and 'Emergency' based on the life of India's former Prime Minister Indira Gandhi is also in pipeline.

Kangana will also don the Director's hat for the second time for "Emergency", based on the life of late Indian Prime Minister Indira Gandhi.