After treating viewers with lovestruck pictures of herself and Anand, Sonam Kapoor Ahuja shared a picture with the entire Ahuja family.

Bollywood diva Sonam Kapoor and Anand Ahuja make the cutest couple in the industry. The couple not only makes sure to spend as much time together on vacations but also tries to be supportive of each other’s work. Sonam shares a beautiful bond with husband Anand Ahuja and his family and often praises their warm nature. The actress is currently in London with her family and treated her fans with stunning pictures with her father and mother-in-law.

After treating viewers with lovestruck pictures of herself and Anand, Sonam Kapoor Ahuja shared a picture with the entire Ahuja family i.e. with father-in-law- Sunil Ahuja, mother-in-law- Priya Ahuja. All four of them twinning in all black added light to the picture. Sonam captioned the picture as ‘Fam’ which is short for Family. Check out the picture here- 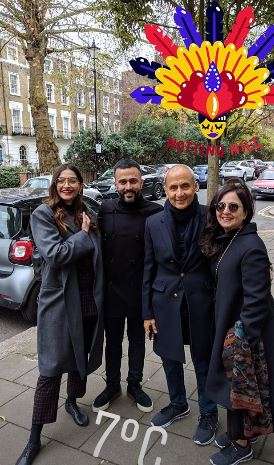 Sonam Kapoor Ahuja is a social media queen. She keeps updating her fans with pictures and videos of her whereabouts. In fact, when brother Arjun Kapoor appeared on Karan Johar’s Koffee With Karan 6 and was asked who he will give the award for social media queen and without a blink he said Sonam Kapoor’s name. The actress has always been very vocal about all the issue and she recently opened up about the ongoing #MeToo Movement through her social media.

The actress wrote, "Recently, in response to the news of an actor accused of harassment, I heard a woman say, “Woh toh bohot handsome ladka hai, usko kyu karna padega? (He is a handsome guy why did he need to do this?). This, sadly, reflects the attitude triumphing in our society over and above believing the survivor. Yes, a person is innocent until proven guilty but must it come at the cost of rejecting a survivor’s account? Defenders of the status quo will try their utmost to discredit women's stories and undermine this movement."

On the work front, Sonam Kapoor was last seen in Veere Di Wedding along with Kareena Kapoor Khan, Swara Bhasker and Shikha Talsania. Sonam is currently shooting for Abhishek Sharma’s The Zoya Factor opposite Dulquer Salmaan for which the actress had got a hair transformation. She will be seen in Ek Ladki Ko Dekha Toh Aisa Laga starring Anil Kapoor and Rajkummar Rao.