Priyanka Chopra, on American Independence Day, shared a throwback picture with Nick Jonas where he is seen wearing a shirt with the American flag printed on it. The couple is enjoying their Italian vacation these days.

The United States Of America celebrates its Independence Day on 4th of July. On the special ocassion, many celebrities like Mark Ruffalo, Hugh Jackman, Gal Gadot, etc. took to social media to post congratulatory messages. In the wake of the same, global icon Priyanka Chopra too posted an adorable throwback picture with husband Nick Jonas from their exotic Europe vacation.

In the picture, the couple can be seen posing for the camera while Priyanka leans on Nick who is seen wearing a shirt with the American flag printed on it. She shared this picture on her Instagram story and wrote alongside, "Happy 4th of July, America. Thank you for being generous to me and all of mine. Have fun and be safe everyone. #Throwback #oneyearago." 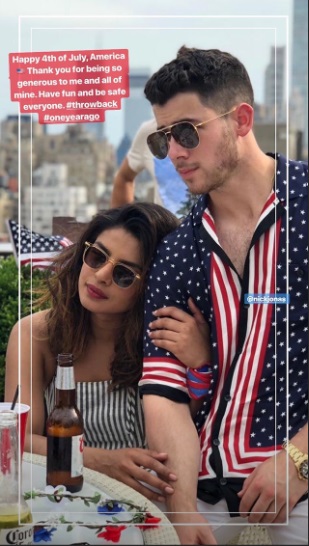 Not only Priyanka, even Nick shared a throwback picture on the same day where he is seen enjoying with his family members and Priyanka. He captioned the picture as, “Last year at our 4th of July bbq. Hope everyone is having a great day. #family.” Have a look:

Meanwhile, the couple who got married in December last year, is now off for a vacation in Italy from where they have been posting delightful pictures. They recently attended the French wedding of Joe Jonas and Sophie Turner. Prinick’s picture at via dell'Amore or The Way of Love, in Liguria, Italy is taking over the internet.

Priyanka, recently in an interview with Elle magazine opened about her wedding with Nick and said, "We decided on the venue for our wedding in October and we got married on December 1. We had one-and-a-half months to plan, so we were just like, 'Yeah, yeah, yeah, let's get it.' And suddenly we were like, 'Oh god. It was very extravagant. Hopefully, you just do it once. So it's fine."

Talking about work front, Priyanka will next be seen in a Bollywood film The Sky is Pink, that also stars Farhan Akhtar and is scheduled to release on October 11. While Nick will be seen in Jumanji 2. Click here for more Bollywood news, Television scoops, celebrity updates and entertainment pictures and videos.