The high-octane elections in Bharatiya Janata Party's stronghold Gujarat came to a close on 5 pm on December 14.

In the home state of Prime Minister Narendra Modi, the voter turnout in the first phase stood at 66.75 per cent. The 89 seats that went to polls were in the Saurasthra, Kutch and south Gujarat regions.

In second phase, the voter turnout till 5 pm stood at 68.7 per cent. Polling was held across remaining 93 constituencies in 14 districts with a host of VVIPs, including Prime Minister Modi and BJP chief Amit Shah, arriving in Ahmedabad to exercise their franchise. Full coverage of Gujarat Assembly Elections 2017

As the voting drew to a close in two phased elections, the controversies continued to hog the lime light. PM Modi's alleged roadshow after casting his vote in Ahmedabad on Thursday created uproar as Congress filed a complaint at Election Commission, before terming the constitutional body a puppet of BJP. Read full story here.

Here are the highlights of the IndiaTv-VMR Exit poll on Gujarat Assembly elections 2017: 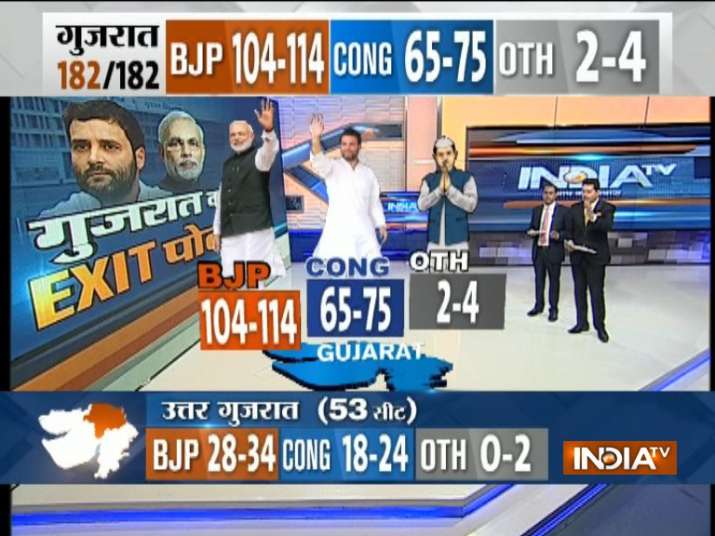 7:20 pm: Amit Shah held more than 70 meetings in a state where Modi ji has grown up and has become the PM: Meem Afzal, Congress

7:18 pm: Congress should now accept that they do not have a plan or an agenda for the development of Gujarat. They only have a bunch of people who create ruckus: Shrikant Sharma, BJP

7:15 pm: Patels who had been associated with us are still with us, I do not want to talk about the Patidars in specific: Shrikant Sharma

7:13 pm: We are winning Himachal elections and have already won the UP elections, it is easy to say that BJP will win in the Gujarat elections also: Shrikant Sharma

7:12 pm: Exit polls always show some result in the beginning, however the end results and the ground reality can be very much different in the end: Meem Afzal, Congress

7:10 pm: People have seen the way Congress works and they would not want the same circumstances for Gujarat again: Shrikant Sharma

6:47 pm: The counts are still lesser than how much Amit Shah had challenged for: India TV-VMR Exit Polls

6:45 pm: Gujarat is one state wherein people are conscious of who they are voting for. I feel proud to say that Gujarat keeps it faith on PM Modi: BJP worker

6:44 pm: I would again say that the exit poll counts are not the factual figures and are just a sample. BJP will witness that we will win on the 18th of December: Congress worker

6:42 pm: I am confident that the final counting for BJP in December 18 will be much more than this: BJP worker,

6:40 pm: We did not need to campaign as much because we had worked hard in the past for Gujarat, still we did it to step in between people: BJP worker 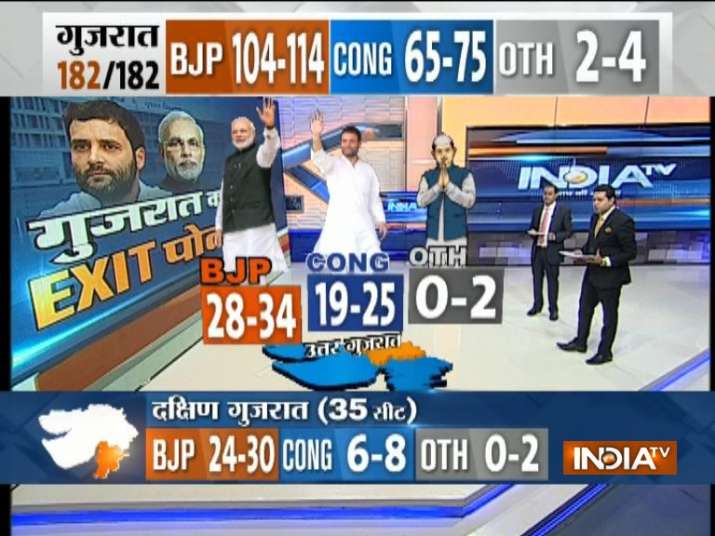 6:35 pm: Mehsana is one area where Patidars have been very powerful, the BJP is seeing to be emerging victorious nevertheless: India TV-VMR Exit Polls 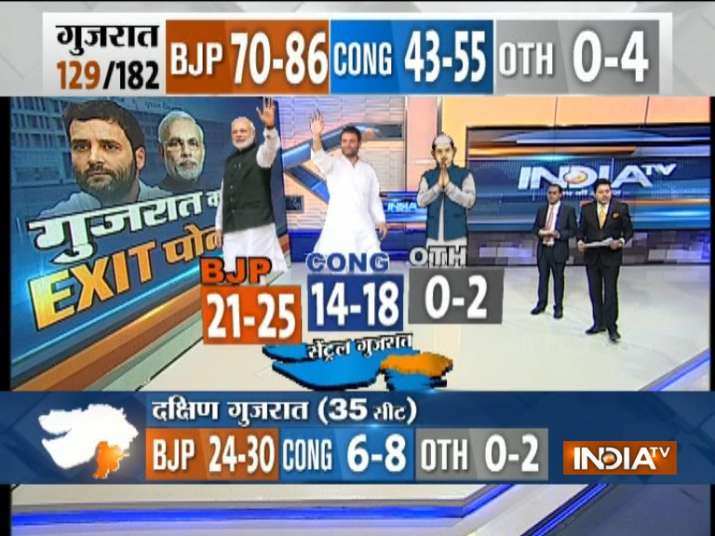 IndiaTv-VMR Exit poll predicts BJP's win the Central Gujarat region with 25 seats, while Congress may be limited to 14 seats.

6:10 pm: Congress made an attempt to play elections over casteism this time. Such kind of strategies had not been seen in the previous elections: BJP worker

6:10 pm: I believe in my own exit poll. I am not over-confident on winning, but I am confident about the hard work done by BJP and the people's support for the same: BJP worker

6:10 pm: We have stepped in between the people and we have seen the support they give to the BJP. PM Modi is the biggest strength of our party: BJP worker

6:09 pm: Congress would have won the elections had their fight was with Anandiben Patel or Vijay Rupani. It has become very difficult for Congress because they are straightly fighting with the Prime Minister of the country: India TV-VMR Exit Polls

6:05 pm: I will not say that the exit poll counts are 1005 reliable, but I would like to say that Congress will win and BJP will see that: Congress worker 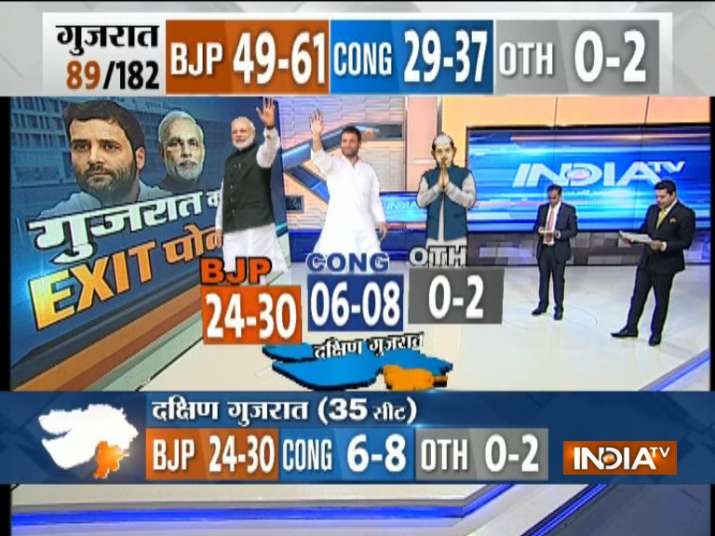 5:55 pm: People used to say that Gujarat is not happy with BJP and that the traders are unhappy with the economic reforms, exit polls show the complete picture of what is true: Shahnawaz Hussain, BJP

5:50pm: Modi ji never talked of the issues being faced by the people of Gujarat, he slammed Rahul Gandhi on all occasions and Gujarat does not want that: Akhilesh Pratap Singh, Congress

5:50pm: Modi ji will have to bear the results of what he has done in the campaigning: Akhilesh Pratap Singh, Congress

5:45 pm: I will not comment if I rely on the exit poll results, I would only say that I have full faith on PM Modi: BJP worker 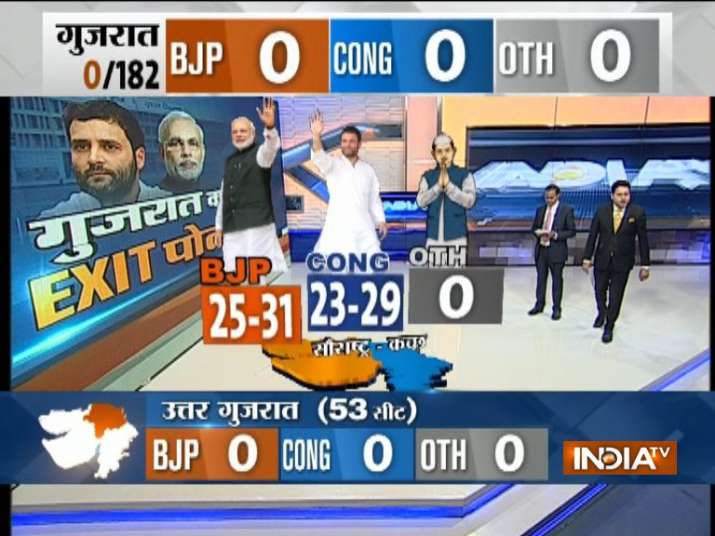 5:38 pm: The people of Gujarat are not happy with BJP and they will realise this on the vote counting day: Akhilesh Pratap Singh, Congres

5:38 pm: BJP will not be able to smile on the 18th, let them be happy for now: Akhilesh Pratap Singh, Congress

5:36 pm: We are appearing in the front and I am confident that we will emerge victorious on the 18th: Syed Shahnawaz Hussain, BJP

5:22 pm: We have full faith on the people of Gujarat, we are sure of getting 2/3 seats: Akhilesh Pratap Singh, Congress

5:22 pm: BJP is expecting too many votes, they have actually failed to serve the people of Gujarat: Akhilesh Pratap Singh, Congress

5:19 pm: Gujarat assembly elections 2017 was most closely contested polls I have ever covered: Radhika, senior journalist

5:10 pm: The way PM Modi and the Gujarat govt has worked in the past years, I do  not think that Gujarat is facing any struggles today: BJP worker

5:05 pm: I do not see any challenges being faced by the Gujarat youth at present: BJP worker

5:00 pm: Voting for the final phase of Gujarat assembly elections closes. Counting to be held on December 18.