No DA hike for central govt employees and pensioners until July 2021. Check details

7th Pay Commission: The Modi government has taken a big decision for over 50 lakh central government employees and more than 60 lakh pensioners. The Union Finance Ministry has decided to not roll out any increment in the dearness allowance (DA) for its 1.13 crore government employees and pensioners' at current levels in view of the coronavirus crisis which has put the economy under stress. The hold on DA hike will remain till July 2021. As per the order, additional instalment of Dearness Allowance (DA) payable to central govt employees & Dearness Relief (DR) to central govt pensioners, due from January 1, 2020 will not be paid. The government had approved 400 bps hike In dearness allowance from January 1.

The move will impact about 49.26 lakh central government employees and 61.17 lakh pensioners.

“In view of the crisis arising out of COVID-19, it has been decided that the additional installment of Dearness Allowance payable to Central Government Employees, Dearness Relief to Central Government pensioners, due January 1, 2020 shall not be paid,” said an Office Memorandum of Department of Expenditure, Ministry of Finance.

However, Dearness Allowance and Dearness Relief at current rates will continue to be paid. said Ministry of Finance. 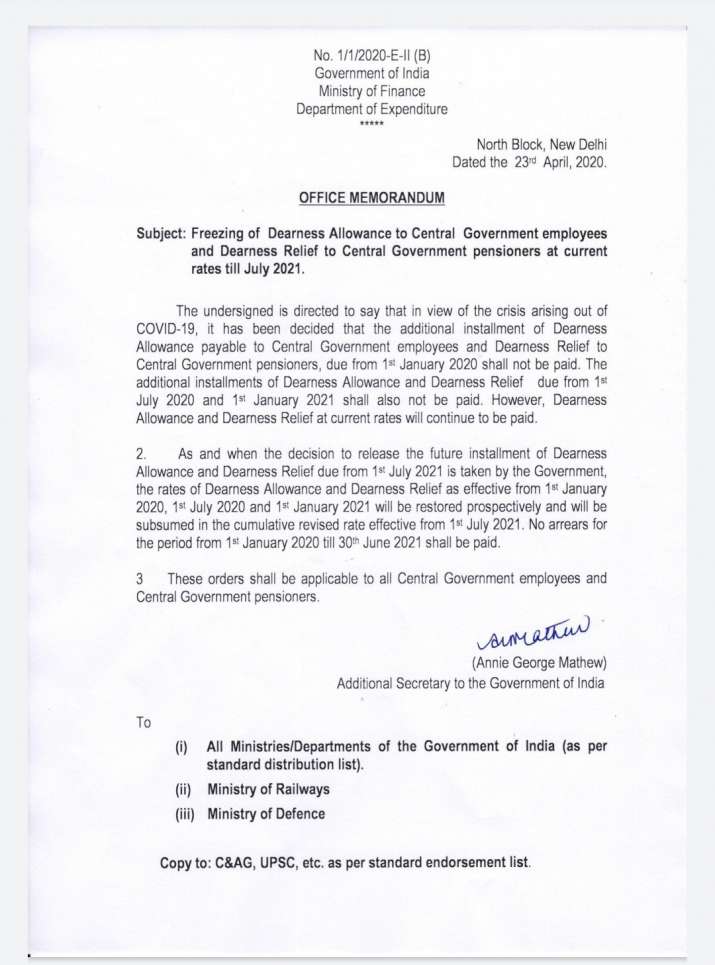 To be noted the April salary, which is due to be paid in a week’s time, was supposed to be based on revised DA, along with arrears for three months (January-March).

In March this year, the government had approved a hike in the dearness allowance rate from 17 per cent to 21 per cent of the basic pay/pension effective from January 1, 2020 under 7th pay commission recommendation. The Cabinet had given its approval to increase the DA by 4% to 21%, which would have cost the exchequer an additional Rs 14,510 crore in FY21.