What is GST, GST Full Form, GST Rates, its impact and what it means for India

Here India TV brings to you the answers of some natural queries that will help you better understand what GST is, GST rates, what the new tax means for individuals, businesses as well as the economy.

The Goods and Services Tax (GST), India's biggest tax reform since Independence, was rolled out past midnight on Friday at a gala event organised in the Parliament's Central Hall. A minute after the stroke of midnight, President Pranab Mukherjee and Prime Minister Narendra Modi pressed the button to launch the new indirect tax regime on a digital screen with 'GST' emblazoned on it in a golden hue.

The movement of goods will now become much simpler across the country and cheaper as the new regime replaces the old system, where a product was taxed multiple times and at different rates.

Here India TV brings to you the answers of some natural queries that will help you better understand what GST is, GST rates, what the new tax means for individuals, businesses as well as the economy.

What is GST or GST Meaning

Full form of GST is Goods and Services Tax .It is a single indirect tax for the whole nation, one which will make India a unified common market. It is a single tax on the supply of goods and services, right from the manufacturer to the consumer. The GST Bill was introduced in Lok Saba in 2009 by erstwhile UPA government but they failed to get it passed. The NDA government introduced a ‘slightly modified’ version of the GST Bill in the Parliament and both the Houses passed it. Through GST, the government aims to create a single comprehensive tax structure that will subsume all the other smaller indirect taxes on consumption like service tax, etc. Touted to be a major game changer, in the words of Union Finance Minister Arun Jaitley ‘it will lead to the financial integration of India’.

Currently, tax rates differ from state to state. GST will ensure a comprehensive tax base with minimum exemptions, will help industry, which will be able to reap benefits of common procedures and claim credit for taxes paid. GST, as per government estimates, will boost India's GDP by around 2 per cent.

GST will break the complicated structure of separate central and state taxes which often overlap with each other to create a uniform taxation system which will be applicable across the country. Taxes will be implemented more effectively since a network of indirect taxes like excise duty, service tax, central sales tax, value added tax (VAT) and octroi will be replaced by one single tax. The state will still have a say in taxation, as the number of taxes will be reduced to three with Central GST, State GST and Integrated GST for inter-state dealings.

The GST Council, headed by Jaitley and of which all states Finance Ministers are members, has approved four main tax slabs -- 5 per cent, 12 per cent, 18 per cent and 28 per cent that aims to lower tax incidence on essential items and to keep the highest rate for luxury and demerits goods. The lowest rate of 5 per cent will be on items of mass consumption which are used particularly by common people. The second and third category of standard rates of 12 and 18 per cent will accommodate most of the goods and services. The fourth slab of 28 per cent is levied mainly on white goods such as refrigerators, washing machines etc.

Under GST, the government has fixed GST rates on 1,211 goods and 500 services in the range of five to 28 per cent. Certain items such as alcohol, petrol, diesel and natural gas will be exempt under the GST. In addition to these, the GST Council has also classified certain items under the 0 per cent tax rate, implying that GST will not be levied on them. This list includes items of daily use such as wheat, rice, milk, eggs, fresh vegetables, meat, fish, sindoor, bindi, stamps, judicial papers, printed books, newspapers, bangles, handloom, bones and horn cores, bone grist, bone meal, kajal, children's' picture, drawing or colouring books, human hair. 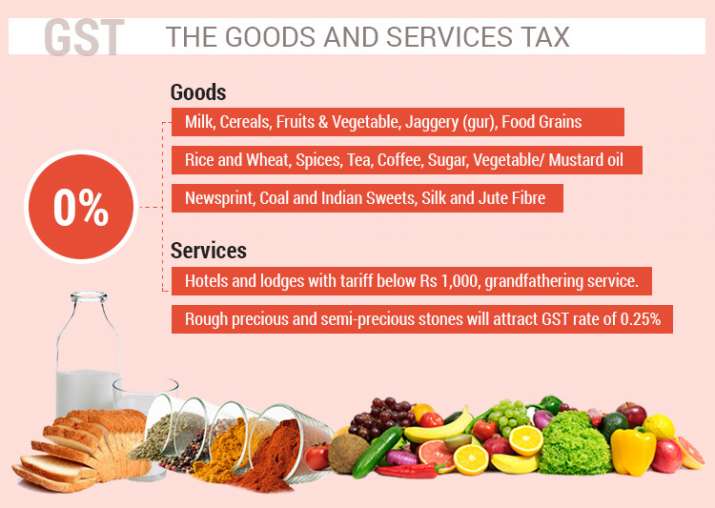 Some services such as education, healthcare, hotels and lodges with tariff below Rs 1,000, grandfathering service have also been kept out of the GST purview. Rough precious and semi-precious stones will, however, attract GST rate of 0.25 per cent.

GST is applicable mainly for businesses and hence won’t directly affect the salaried class and self-employed professionals such as doctors, lawyers etc. However, it will impact their expenses due to the change in rates of goods and services they avail. Other than that, they will continue to pay their income tax like before. The medical sector has been exempted from GST.

The GST is all set to change the way businesses have operated until now. The elimination of multiple levies and creation of a single market with fewer tax rates and fewer tax exemptions will improve the ease of doing business and reduce avoidable litigation. It also untangles a complex web of taxes that businesses have been subjected to under the existing system. However, these advantages are only going to be visible in the long run. At the moment, businesses are clearly unsure about what the immediate impact will be. Other than the unpredictability over the increase in the headline tax rate on many items being offset by the extra tax credits on raw materials and services, as claimed by the government, adopting to a whole new online system is a task in itself.

The taxes GST will subsume

Industries and commercial enterprises were paying various taxes at various stages of a product or service, such as manufacture, transport, wholesale, logistics and retail. The administration of these taxes were often tangled in paperwork, resulting in slow inter-state movement of products and increased costs for consumers. GST new replaces at least 17 existing indirect taxes being levied by the Centre and states.

All these taxes have been replaced by Central GST, State GST and Integrated GST (on every inter-state supply of goods and services). After its implementation, consumers will not be subjected to the burden of double taxation. The final consumer will bear only the GST charged by the last dealer in the supply chain, with set-off benefits at all the previous stages.

GST brings benefits to all the stakeholders of industry, government and the consumer. It will lower the cost of goods and services, give a boost to the economy and make the products and services globally competitive. Besides, it aims to remove the economic barriers, thus paving the way for an integrated economy at the national level. GST is also pegged to improve competitiveness and improve liquidity of the businesses. Besides widening the tax base and improving the taxpayer compliance, GST will help in improving the country’s ranking in the ‘Ease of Doing Business Index’. India is currently ranked 130 out of 190 countries in World Bank Group's annual report on the ease of doing business.

The new tax regime is largely technology driven. It will reduce the human interface to a great extent and this will definitely lead to speedy decisions. Also, all imported goods will be charged integrated tax (IGST) which is equivalent to Central GST + State GST. This will bring equality with taxation on local products. GST will also help boosting Indian exports in the international market, improving the balance of payments position. Exporters with clean record will be rewarded by getting immediate refund of 90 per cent of their claims arising on accounts of exports, within a week period of time.

According to Finance Minister Arun Jaitley, GST will boost economic growth by as much as 2 per cent. This will, in turn, reduce the budget deficit and help the government to allocate more funds for development projects.