The Poco F2 listing shown on Geekbench points to Android 9.0 Pie OS on the phone and has a Snapdragon 845 processor.

With gaining massive popularity right after its launch, seems like Poco F2 the successor of Poco F1 is in the pipeline. The phone has been spotted on Geekbench along with some of its specifications. Seen on Geekbench, the phone is listed with Snapdragon 845 processor and appears to come with Android 9.0 Pie out-of-the-box. Xiaomi had launched the Poco F1 in August and was launched to compete with the like of other budget flagships of Asus ZenFone 5Z and OnePlus 6. The Poco F1 was launched at a starting price of Rs 20,999 that has recently received a price cut of Rs 1,000.

The Poco F2 listing shown on Geekbench points to Android 9.0 Pie OS on the phone and has a Snapdragon 845 processor. This is surprisingly interesting as the recent update received on Poco F1 is MIUI 10 based on  Android 9.0 and this phone too is powered by the Snapdragon 845 SoC. 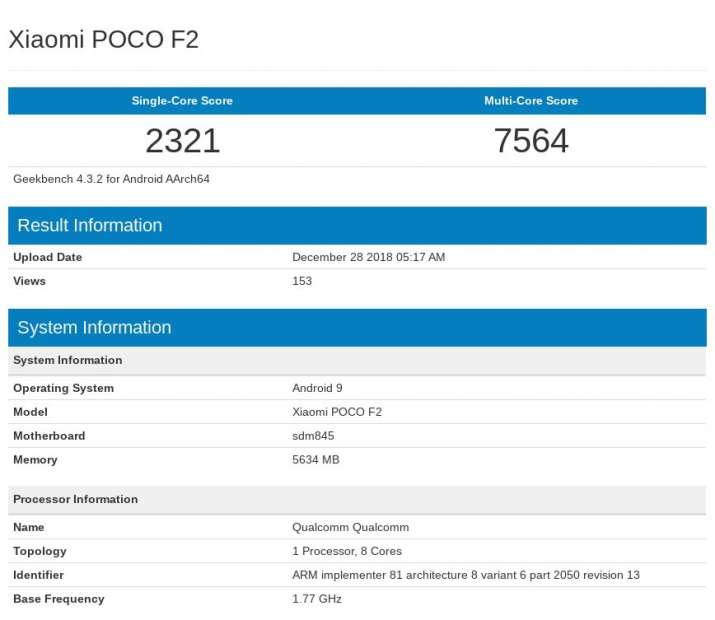 The Geekbench listing also suggests that the Poco F2 will come with 6GB RAM, but we think that it could come with an 8GB RAM variant as well. Moreso, the listing on Geekbench that carries 28 December upload date, received a single-core score of 2,321 and a multi-core score of 7,564.

Xiaomi had recently launched the Poco F1 6GB RAM/ 128GB Armoured Edition variant that went on sale at a price tag of Rs 23,999.