Lewis Hamilton raised his voice against the 'injustice', writing a long note on his official Instagram profile.

Formula One driver Lewis Hamilton slammed silence of fellow racers on the death of Floyd George, which has caused massive outrage across the United States. Floyd, aged 46, died last week shortly after Derek Chauvin, a police officer, held him down with a knee on his neck though he repeatedly pleaded, "I can't breathe," and "please, I can't breathe".

Hamiton took to social media to criticise fellow racers and stated he remains the only one to raise his voice against the 'injustice'.

"I see those of you who are staying silent, some of you the biggest of stars yet you stay silent in the midst of injustice," Hamilton wrote on his Instagram.

"Not a sign from anybody in my industry which of course is a white-dominated sport. I'm one of the only people of colour there yet I stand alone.

"I would have thought by now you would see why this happens and say something about it but you can't stand alongside us. Just know I know who you are and I see you." 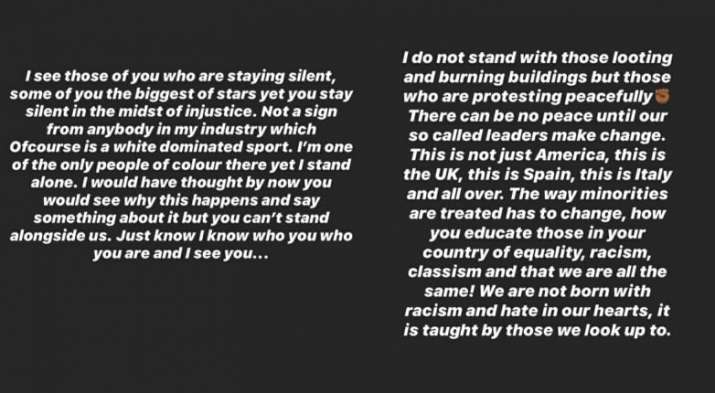 Following Hamilton's outburst, young Ferrari racer Charles Leclerc took to social media to say racism must be dealt with action and not silence.

"To be completely honest, I felt out of place and uncomfortable sharing my thoughts on social media about the whole situation and this is why I haven't express myself earlier than today," he tweeted.

"And I was completely wrong. I still struggle to find the words to describe the atrocity of some videos I've seen on Internet.

"Racism needs to be met with actions, not silence. Please be actively participating, engaging and encouraging others to spread awareness.

"It is our responsibility to speak out against injustice. Don't be silent. I stand #BlackLivesMatters."

Renault driver Daniel Ricciardo also expressed grief and urged the authorities to take sincere action against racism that is prevalent in the society.

"Seeing the news the last few days has left me saddened. Now more than ever we need to stand together, unified together. Racism is toxic and needs to be addressed not with violence or silence but with unity and action," he wrote in Instagram.