Virat Kohli and RCB are gearing up for IPL 2020 slated to be held next month in the UAE.

Indian skipper and the captain of Royal Challengers Bangalore gave a sneak peek of his new cricket kit as the franchise readies itself for the 13th season of the Indian Premier League slated to be held next month in the UAE.

Kohli on Sunday shared an Instagram story that had a picture of new bats and pads with a fingers-crossed emoticon. 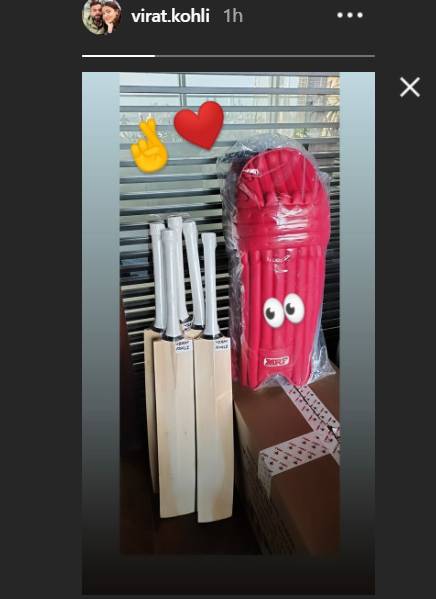 Late last month, IPL chairman Brijesh Patel announced the dates and venue for IPL 2020 which will be a 51-day affair as usual while comprising 60 matches. However, the bio-security protocols, squad strength and logistical issues are aspects yet to be discussed by the Governing Council of IPL and BCCI.

For Kohli, he will be looking to tick that one box that has invited quite some criticism in his career. RCB is among the few IPL franchises yet to win an IPL trophy and 2020 edition will once again hand Kohli the opportunity to start things afresh.

Earlier, former cricketer Aakash Chopra opined that teams like RCB will benefit from the big grounds in UAE.

“Batting conditions would not have much of an impact. In fact, certain teams may start feeling better. RCB for example, because when the grounds are big your bowling is not exposed that much even if it is weak. RCB I think might actually do well,” said Chopra speaking on his YouTube channel.