Ravichandra Ashwin has also returned to the T20 set-up. The 34-year-old Ashwin last played white-ball cricket for India in 2017.

The BCCI on Wednesday announced India's 15-member squad for the ICC T20 World Cup, which will be played in the United Arab Emirates and Oman from October 17 to November 14. Virat Kohli will lead the Indian side with opener Rohit Sharma as his deputy.

India's premier fast bowler Jasprit Bumrah has also returned to the T20I side for the first time in over a year. Kohli, Rohit, Suryakumar Yadav, and KL Rahul will be part of the batting core, with Rishabh Pant and Ishan Kishan as the two wicket-keepers.

Babar Azam on T20 World Cup clash: Pressure will be more on India than us

Hardik Pandya, Ravindra Jadeja, and Axar Patel have been named as all-rounders of the side. On the bowling front, Bumrah will spearhead the pace force, with Mohammed Shami and Bhuvneshwar Kumar in the mix.

Experienced off-spinner Ravichandran Ashwin has also found a place in the set-up. The 34-year-old Ashwin last played white-ball cricket for India in 2017. 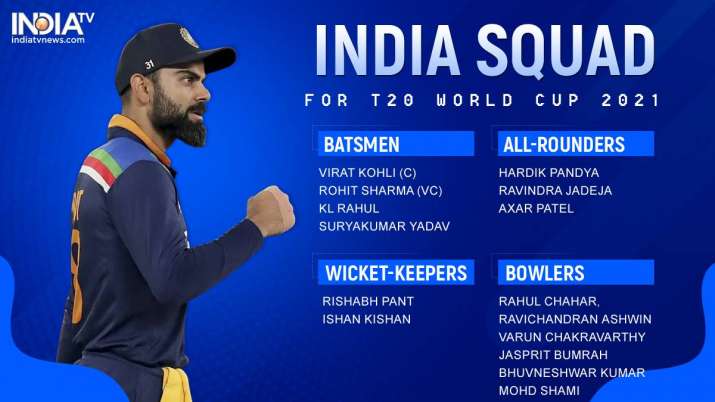 Talking about the squad, chief selector Chetan Sharma said: "Ashwin is an asset. He performed well in the IPL and we needed a player of his experience. We need an off-spinner with Washington (Sundar) injured. Ashwin is the only off-spinner in the squad. Varun is a mystery spinner who is a surprise package for the world," he added.

Sharma also stated that all-rounder Hardik Pandya is "absolutely fit and will bowl his quota of overs." "We have picked Rahul Chahar over Yuzi as we wanted someone who bowls fast and gets pace off the pitch," Sharma explained.

Rahul Chahar and Varun Chakravarthy have also been included in the spin-bowling unit. Shreyas Iyer, Deepak Chahar and Shardul Thakur have been named as standby players. Shikhar Dhawan-Prithvi Shaw duo and Yuzvendra Chahal, however, have failed to make the cut.

Notably, former skipper MS Dhoni will also be mentoring the team in the marquee tournament.

India are placed in Group 2 of the Super 12 stage of the marquee event. The other members of the group include New Zealand, Afghanistan and two more teams who will qualify after Round 1 of the World T20.

India will kick off their campaign against arch-rivals Pakistan on October 24 in Dubai. The Men in Blue will then have matches against New Zealand (October 31), Afghanistan (November 3), and the two teams which will secure their places in the main tournament through qualifiers (on November 5 and November 8).

The Twenty20 showpiece is slated to begin immediately after the conclusion of the second phase of the 2021 Indian Premier League (IPL).