Three in three: MS Dhoni puts criticism behind and lets the bat talk Down Under

Mahendra Singh Dhoni finished the three-match series against Australia with 193 runs and was adjudged the man-of-the-series.

Mahendra Singh Dhoni hit his third fifty in a row to help India scrape through to victory against Australia in the third and final ODI at the Melbourne Cricket Ground on Friday.

Dhoni, who finished the series with 193 runs and three fifties, remained unbeaten on 87 and was ably supported by Kedar Jadhav, who also remained not out on 61 to take India past the finish line and seal their first-ever bilateral ODI series victory Down Under.

Don't care who it is, 'agenda-driven' criticism will get a punch back: Ravi Shastri

Dhoni came to Australia under severe pressure. With little or no match practice behind his back and a really low strike-rate, Dhoni's spot was under the scanner especially with Rishabh Pant doing well in Test cricket.

But, when it mattered the most, he showed why he is so important to this team especially with the World Cup down in the line in five months time in England.

Dhoni's knock in the first ODI at Sydney came slow and many criticised him for how he went about things but he turned things around in Adelaide with a 54-ball 55 not out and took India home to level the series. And, two days later, he kicked on from where he left off at the Adelaide Oval to help India script history.

Dhoni again played a slow innings but much like the second ODI, he timed it to perfection. MS, who was dropped on the first ball he faced and then again on 74, was unfazed and calmly guided the team home -- a  MS trademark as people would say.

Dhoni faced 114 balls, hit six boundaries and played at a strike-rate of 76.32 but what he did perfectly was hold one up and make sure that India do not lose another wicket. The wicket was slow and it was going to be diffiult for anybody to come and hit from the word go -- therefore, it was necessary for him to stay there and play a perfect foil to Kedar Jadhav's attacking batting from the other end, who in the end finished with a strike-rate of 107.02.

"It was a slow wicket, so it was difficult to hit whenever you wanted to. No point going after the bowlers who were bowling well, so we wanted to take it deep and that was the plan. Kedar did a great job in executing," Dhoni at the presentation ceremony, where he was awarded the man-of-the-series award. 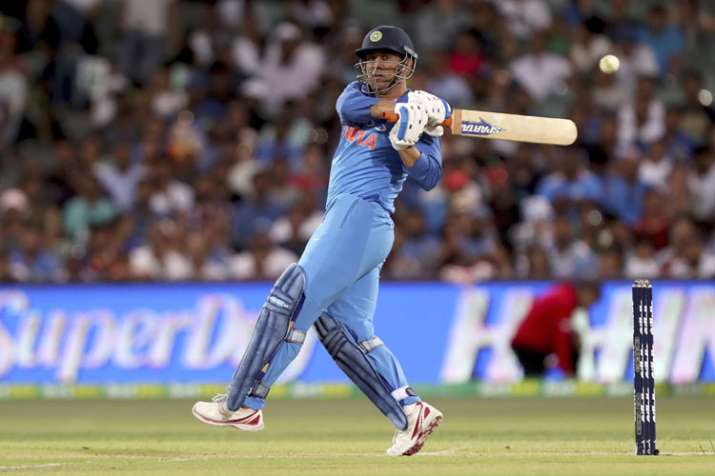 The former captain is in now way looking at his best touch but the fact that he is controlling games and allowing people to play around him, will give India a great relief as the World Cup nears.

While it was always Virat Kohli, who has stood out in run-chases, Dhoni's recent exploits will pacify the captain and the team management that there is someone, who can pick the mantle and do the job if the captain falls.


Not only that, he also joined Kohli, Rohit Sharma and Sachin Tendulkar in the list of scoring 1000 ODI runs in Australia for India.

With the ODI series in Australia done and dusted, India have only 10 ODIs left before the World Cup and Dhoni's form in the middle-order will now ease things up for Kohli & Co. as they look to give India their third 50-over World Cup trophy in the same place, where it all started.