Satellite images by NASA and European Space Agency have shown a significant decline in pollution levels over China, partly due to the economic slowdown following the deadly coronavirus outbreak, the US space agency has said.

Satellite images by NASA and European Space Agency have shown a significant decline in pollution levels over China, partly due to the economic slowdown following the deadly coronavirus outbreak, the US space agency has said. The pollution monitoring satellites of the space agencies detected significant decreases over China in nitrogen dioxide (NO2), a noxious gas emitted by motor vehicles, power plants, and industrial facilities, NASA said in a statement.

In January, Chinese authorities had shut down transportation going into and out of Wuhan, as well as local businesses, in order to reduce the spread of the new coronavirus (COVID-19).

It was the first of several quarantines set up in the country and around the world, according to NASA.

The virus has so far killed over 3,000 people, and infected more than 88,000 globally after the outbreak in China in December last year.

Maps created using data from NASA and ESA satellites show NO2 values across China from January 1-20 (before the quarantine) and February 10-25 (during the quarantine). 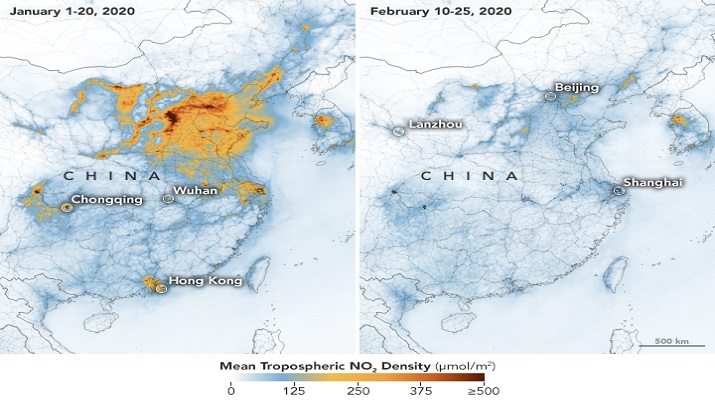 The data were collected by the Tropospheric Monitoring Instrument (TROPOMI) on ESA's Sentinel-5 satellite. A related sensor, the Ozone Monitoring Instrument (OMI) on NASA's Aura satellite, has been making similar measurements. According to NASA scientists, the reduction in NO2 pollution was first apparent near Wuhan, but eventually spread across the country.

"This is the first time I have seen such a dramatic drop-off over such a wide area for a specific event," said Fei Liu, an air quality researcher at NASA's Goddard Space Flight Center.

Liu recalls seeing a drop in NO2 over several countries during the economic recession that began in 2008, but the decrease was gradual.
Scientists also observed a significant reduction around Beijing during the 2008 Olympics, but the effect was mostly localised around that city, and pollution levels rose again once the Olympics ended.

The drop in nitrogen dioxide in 2020 also coincided with Lunar New Year celebrations in China, and much of Asia, according to NASA.
Generally, businesses and factories close from the last week in January into early February to celebrate the festival.

Past observations have shown that air pollution usually decreases during this period and then increases once the celebration is over, NASA said.

"There is always this general slowdown around this time of the year," said Barry Lefer, an air quality scientist at NASA. "Our long-term OMI data allows us to see if these amounts are abnormal and why,"Lefer said.

Launched in 2004, OMI has been collecting global data on NO2 and various air pollutants for more than 15 years. The maps show NO2 values over three periods in 2020: January 1-20 (before Lunar New Year), January 28-February 9 (around New Year celebrations), and February 10-25 (after the event).

The 2020 values were compared to the same periods in 2019 for reference. Lefer noted that the overall values in 2020 were lower than 2019 due to new environmental regulations that China has enforced over the past few years.

While the Lunar New Year may have played a role in the recent dropoff, researchers believe the decrease is more than a holiday effect or weather-related variation.

In a preliminary analysis, NASA researchers compared NO2 values detected by OMI in 2020 with the average amounts detected at this time of year from 2005-2019.

In 2020, NO2 values in eastern and central China were significantly lower -- from 10 to 30 per cent lower -- than what is normally observed for this time period.

Liu and colleagues have not seen a rebound in NO2 after the holiday. "This year, the reduction rate is more significant than in past years and it has lasted longer," she said. "I am not surprised because many cities nationwide have taken measures to minimise spread of the virus," Liu added.