Scientists and paleontologists have identified the first known cancer in a dinosaur. The researchers at McMaster University and the Royal Ontario Museum (ROM) have reported the aggressive malignant bone cancer--osteosarcoma in the dinosaur's bone.

Scientists and paleontologists have identified the first known cancer in a dinosaur. The researchers at McMaster University and the Royal Ontario Museum (ROM) have reported the aggressive malignant bone cancer--osteosarcoma in the dinosaur's bone. The cancer was discovered in the lower leg bone of a horned dinosaur--Centrosaurus apertus that lived 76 to 77 million years ago.

Interestingly, the fossil was discovered in Dinosaur Provincial Park in Alberta in 1989.

The researchers used to believe that the badly malformed end of the fossil was the result of the recovery from a fracture. 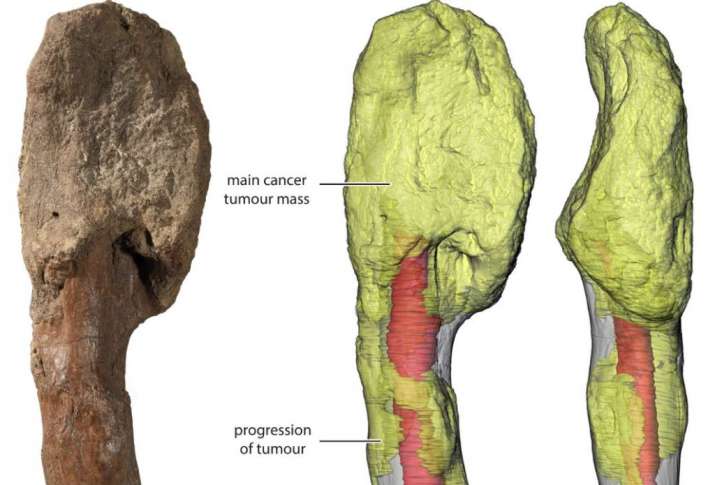 The bone was then examined by a whole team of experts specializing in everything from radiology to orthopedic surgery. What the team found was that the growth was indeed a massive bone tumor, and that it was an aggressive form of cancer.

Dr. Mark Crowther, co-author of the study as quoted by BGR said in a statement: "Diagnosis of aggressive cancer like this in dinosaurs has been elusive and requires medical expertise and multiple levels of analysis to properly identify."

“Here, we show the unmistakable signature of advanced bone cancer in 76-million-year-old horned dinosaur—the first of its kind. It’s very exciting," he added.

The findings have been published in the journal The Lancet Oncology.

The dinosaur’s cancer was at “an advanced stage,” the scientists say, and it would have made it difficult for the animal to move efficiently, potentially leaving it open to attacks from other dinosaurs. However, the cancerous bones were found in a large “bone bed” along with many others from the same species. Paleontologists believe it was one member of a herd that died during a flood. It was that herd lifestyle that may have allowed the dinosaur to persist despite its debilitating condition.