States with worst sex ratios have most female MLAs

States with poor development indicators for women (mainly sex ratio and female literacy) have higher representation of women in their vidhan sabhas (legislative assemblies) according to an analysis of Census and Election Commission data.The top

States with poor development indicators for women (mainly sex ratio and female literacy) have higher representation of women in their vidhan sabhas (legislative assemblies) according to an analysis of Census and Election Commission data.

The top five states of India with the highest percentage of women MLAs (members of legislative assembly) are also states with the worst sex ratios.

There has been a surge in the number of women MLAs in Bihar since the 2000 elections, as IndiaSpend and GenderinPolitics reported earlier.

From 5.9% in 2000, women made up 14% of the Bihar vidhan sabha after the 2010 election, the highest proportion of women in any Indian state assembly.

ALSO READ: Piplantri: A village in Rajsathan that plants 111 trees on birth of every girl child!

The number of women contesting elections in Bihar has increased 62% since 2000, while the number of constituencies they contested from increased 33%. 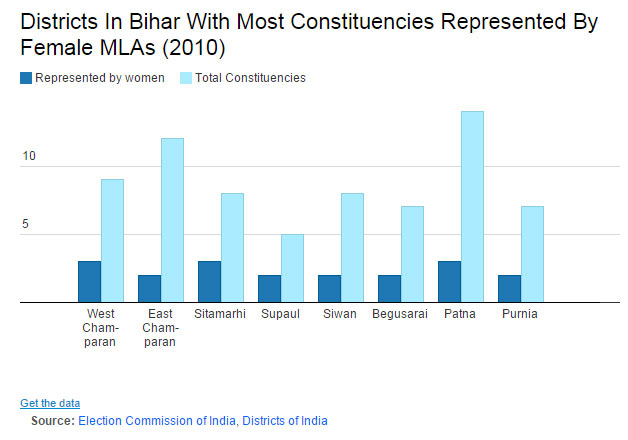 In Supaul, west Champaran and Sitamarhi, a third of constituencies were represented by women. Most of these districts are contiguously located in northern Bihar.

Constituencies that elect female MLAs tend to re-elect them

Another interesting pattern is that any increase in women MLAs has almost always been in these districts in the last two elections, 2000 and 2010. 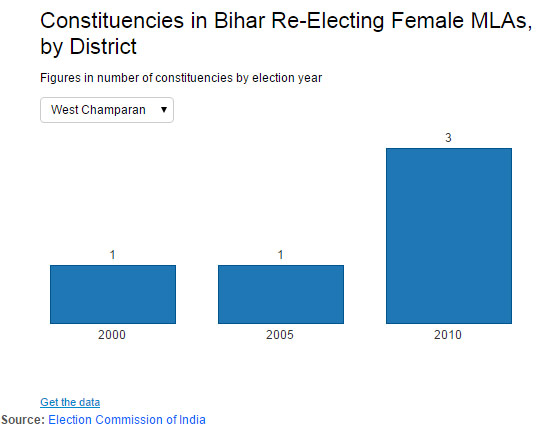 Between 2005 and 2010, Bihar elected nine more women MLAs, all from the constituencies in districts we mentioned above. West Champaran and Begusarai had two more constituencies than the previous year that elected women MLAs. 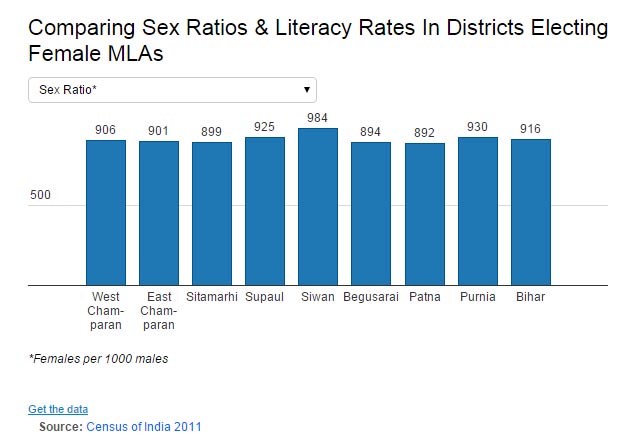 The overall sex ratio for Bihar is 916, against the national average of 940.

Except Siwan, Supaul and Purnia, rest of the districts with female representation are way below the state average.

West Champaran and Sitamarhi, which have the most constituencies with women MLAs, have poor sex ratios and low literacy rates.

So, do districts with poor development indicators elect more women? In Bihar, that certainly appears to be the case.

Although the causal factors are unknown, the correlation, in Bihar's case, is evident, which corroborates the larger pattern seen in many states with a high proportion of female MLAs and low human development indicators.