As the death tolls due to the deadly Coronavirus is rising, the latest research by several Chinese scientists shows the virus has passed from bats to snakes then humans.

As the death tolls due to the deadly Coronavirus is rising, a latest research by several chinese scientists show the the virus has passed from bats to snakes then humans. Meanwhile, an unusual delicacy Bat Soup which very popular particularly in Wuhan, seems to be the origin of the virus. Unconfirmed footage posted on social media show people eating soup from a bowl with a grinning dead bat on the side.

Another image appears to show a dead bat with its stomach removed and filled with a broth. A new study published in the China Science Bulletin earlier this week claimed that the new coronavirus shared a strain of virus found in bats. 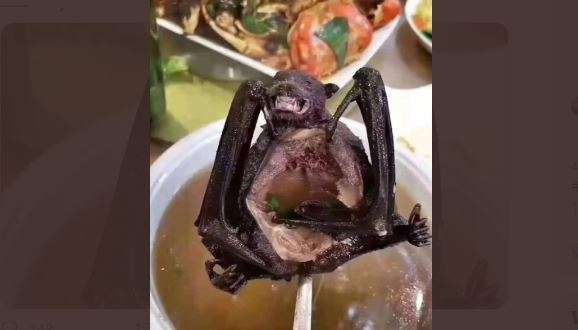 Interestingly, deadly outbreaks of SARS and Ebola were also believed to have originated in the flying mammal. Experts had thought the new virus wasn't capable of causing an epidemic as serious as those outbreaks because its genes were different.

The World Health Organization on Thursday decided not to declare the Wuhan coronavirus outbreak a global emergency, despite the spread of the dangerous respiratory infection from China to at least five other countries.

“The early evidence at this stage would suggest it’s not as severe,” Australia’s Chief Medical Officer Brendan Murphy said.

Giving the latest details on infections in China, state television said 634 cases had been confirmed. By the end of Wednesday, China’s National Health Commission confirmed 17 dead.

Of the known cases worldwide, Thailand has confirmed four, while Singapore, Japan, South Korea, Taiwan and the United States have reported one each.

Imperial College London said on Wednesday it estimated a total of 4,000 cases in Wuhan alone as of January 18, based on the number of cases reported in China and elsewhere.

Till now the deadly new virus has killed at least 26 people and infected about 830 others.

The coronavirus family includes the common cold as well as viruses that cause more serious illnesses, such as the SARS outbreak that spread from China to more than a dozen countries in 2002-2003 and killed about 800 people, and Middle Eastern respiratory syndrome, which developed from camels.