Following the first incident, Prime Minister Hasina promised to bring to justice the culprits behind the violence, saying anyone involved in the attacks on Hindu temples and Durga Puja venues in Comilla will not be spared.

As many as four persons were killed and 30 others were injured in attacks on the temples, including the ISKCON temple in Bangladesh's Noakhali. The incidents took place on Friday, following which section 144 has been imposed in the areas to keep the situation under control. First, several local media reports claimed that Durga Puja pandals and idols were vandalised in Bangladesh, following which the Hindu leaders announced they would not immerse Durga idols in protest against the vandalism of the JM Sen Hall's puja venue, in the presence of police. They also demanded the removal of a police officer. Hours later, devotees at ISKCON temple were attacked.

What happened at Durga Puja pandal attack in Bangladesh

Following the Friday prayers, a group of people held a meeting at the gate of Andarkilla Jummah mosque and then marched towards JM Sen Hall in a procession, according to witnesses. The procession broke through police barricades at the intersection and then attempted to breach the locked gate of JM Sen Hall. Then they proceeded to throw brickbats and rip apart puja banners on the walls around the street.

Advocate Kankan Dev, one of the witnesses told IANS: "We had the plan to start to immerse the idols in the sea after 2.30 p.m. Suddenly we saw them coming... and all the police officers disappeared while the mob was throwing brickbats and tearing down festival banners."

Amid the violence, female devotees protected the idol from the attackers.

"The leaders of the council, which had organised the puja celebration at JM Sen Hall, declared that they will not carry out immersion of the idols to end the festival unless the police officials punished for the security is ensured," Dasgupta told IANS.

"Immersion begins from 11 a.m. every year. But the government directed us to get out of the pavillion after 2.30 p.m. this time around due to the Friday prayers. Is there any assurance of safety on the streets when our idols, pandals, and pavilions are being attacked?

"Let the government speak of our safety, then we will immerse the idols. Until then, no pandals in Chittagong metropolitan will carry out idol immersions," he added.

At around 3 p.m., Dasgupta arrived at the JM Sen Hall intersection and expressed solidarity with the puja celebration council. Announcing the strike from 6 a.m to 12 p.m. (Saturday), and vowing to continue demonstrations, he said: "We are ready to shed blood if anyone attempts to hinder our demonstration."

AJM Nasir Uddin, General Secretary of Chittagong City Awami League, meanwhile, urged the devotees, who protested against his anti-people and anti-Hasina role, to withdraw their announcement. Later, Nasir took away the idols from JM Sen Hall with police protection to immerse the idols of Goddess Durga, which in turn annoyed the Hindu devotees.

In response, he said: "As chief of CMP, you have denied protecting the minority and their temple... We want justice against the atrocity and attack on the minorities. If we cannot get justice, this Bangladesh will be ruined like Afghanistan." 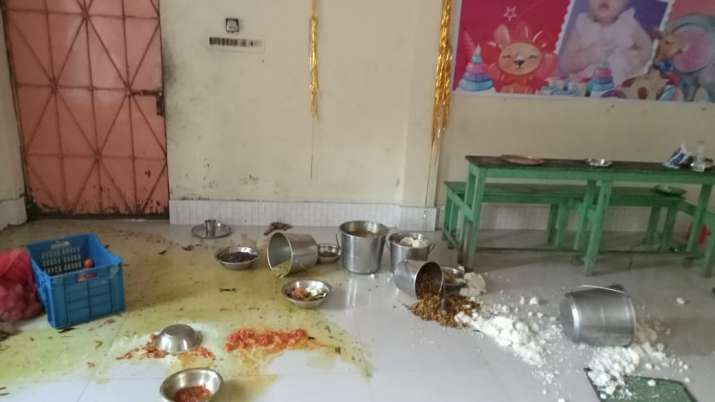 A few hours after the Durga Puja pandal attack, the ISKCON temple in a tweet said, "ISKCON temple & devotees were violently attacked today by a mob in Noakhali, Bangladesh. Temple suffered significant damage & the condition of a devotee remains critical. We call on the Govt of Bangladesh to ensure the safety of all Hindus & bring the perpetrators to justice."

The temple also announced the killing of one of its members, saying, "It is with great grief that we share the news of an ISKCON member, Partha Das, who was brutally killed yesterday by a mob of over 200 people. His body was found in a pond next to the temple."

In yet another statement, Vrajendra Nandan Das, Director-ISKCON National Communication said a total of three devotees were killed in the attack.

A home ministry spokesperson said that the Border Guards Bangladesh (BGB) troops have been deployed in 22 districts across the country to stop the spread of violence. The elite anti-crime Rapid Action Battalion (RAB) and the armed police were also ordered to be on guard with the BGB in 22 of the 64 administrative districts and elsewhere to contain any violence, he said.

Three people were killed and several others injured during clashes between Muslim bigots and the police at Hajiganj sub-district in Chandpur, bordering Cumilla on Wednesday while the fourth one succumbed to his wounds later.

Prime Minister Hasina promised to bring to justice the culprits behind the violence, saying anyone involved in the attacks on Hindu temples and Durga Puja venues in Comilla will not be spared.

"The incidents in Comilla are being thoroughly investigated. Nobody will be spared. It doesn't matter which religion they belong to. They will be hunted down and punished," she said while exchanging greetings with the Hindu community members during an event at Dhakeshwari National Temple in Dhaka on the occasion of Durga Puja.

She joined the program from her official Ganabhaban residence through a video conference.