The fear and panic gripping Kabul are palpable as the Taliban militant group marches on the capital following a devastating, months-long military offensive during which it has seized large swaths of the war-torn country.

People in Kabul have been fleeing the capital as news of the Taliban advance emerges. Long queues of cars have formed as people try to find a way out of the city. Banks have also been busy as residents try to withdraw their savings, BBC reported.

Afghan MP Farzana Kochai describes the scene: "I'm in my house and looking at the people who are just trying to run." She continues: "I don't know where they're trying to go, even in the streets and from their houses, the bags they are carrying... and all these things. It's heartbreaking, you know."

Earlier, Pakistan said it was closing the Torkham border crossing with Afghanistan after the militants seized the Afghan side of the border, according to reports.

This leaves Kabul International Airport as the only way out of the country. Afghan radio reports said that the road to Kabul's international airport is clogged with thousands of people who are rushing to leave the country.

Thousands of others stand in long queues, stretching for kilometers, outside the capital's only passport office, desperately trying to secure travel documents. 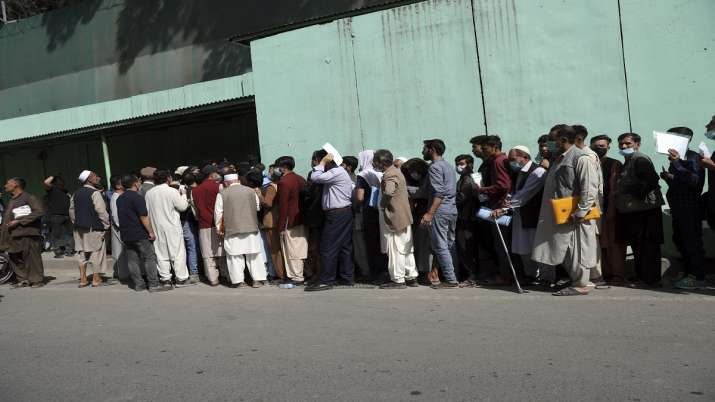 Others frantically rush around downtown Kabul, a city of some 5 million people, running last-minute errands before fleeing their homes.

The fear and panic gripping Kabul are palpable as the Taliban militant group marches on the capital following a devastating, months-long military offensive during which it has seized large swaths of the war-torn country.

"It's a feeling of shock and sadness compounded by brutal uncertainty," says Timor Sharan, a former civil servant and the director of the Afghanistan Policy Lab, a Kabul-based think tank. "Shopping in the city today, I felt people were gripped by a sense of being stuck; stuck in an uncertain future and never able to dream, aspire, think, and believe anymore."

Meanwhile, the price of some food staples like flour has surged by 30 percent, while gas prices have almost doubled in recent weeks, even as poverty spreads and a humanitarian crisis worsens.