A window-rattling late winter storm brought blizzards, floods and a tornado across more than 25 states Wednesday, stretching from the northern Rocky Mountains to Texas and beyond.

A window-rattling late winter storm brought blizzards, floods and a tornado across more than 25 states Wednesday, stretching from the northern Rocky Mountains to Texas and beyond.

“This is a very epic cyclone,” said Greg Carbin, chief of forecast operations for the National Oceanic and Atmospheric Administration’s Weather Prediction Center. “We’re looking at something that will go down in the history books.”

In Colorado, a state patrol officer was hit and killed by a car as he was helping another driver who slid off Interstate 76 near Denver.

Corporal Daniel Groves, 52, was outside his patrol car when he was struck. He died at a hospital.

Hundreds of drivers were stranded on Colorado highways, including 500 in the Colorado Springs area alone. Gov. Jared Polis activated the National Guard to help find and rescue snowbound drivers. 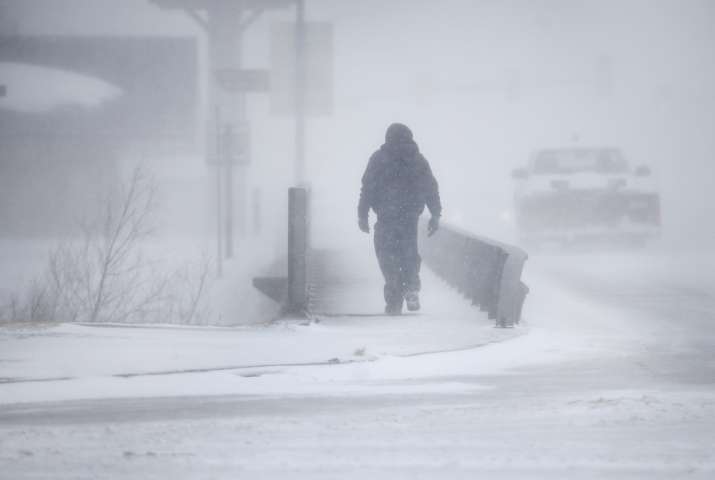 Bria McKenzie, 22, said she and her mother, brother and sister were stuck in their car for more than two hours on a hilly road in Colorado Springs.

The snow was blinding and numbing, and the wind was whipping so hard she didn’t feel safe walking to a hospital just down the road, she said.

“We thought about it, well maybe we’ll run over to the hospital — at least we’ll be warm,” she said. “But we were soaking wet already just from trying to keep the windshield clear and from trying to push our car and help other people push their cars. It was just like every second you were out there, it felt like parts of you were just freezing.”

McKenzie said they were eventually rescued by her father in his pickup truck.

Hundreds of flights were canceled at Denver International Airport, and nearly 40 were grounded in Colorado Springs.

“It caught me completely off guard,” said Sarah Brin of Santa Fe, New Mexico, who was stranded at the Denver airport.

It was supposed to be a brief layover on her flight home from the South by Southwest Film Festival in Austin, Texas, but it turned into an overnight stay.

She booked a room in a downtown hotel and reserved a spot on a shuttle van, but some shuttle trips were canceled because of the weather.

“We’ll see if they actually show up,” she said.

Many schools and government offices closed for the day. Xcel Energy said high winds caused about 184,000 homes and businesses to lose electricity, mostly in the Denver area. Xcel spokesman Mark Stutz said zero visibility made conditions difficult for repair workers, and it could take days to restore power to everyone.

In North Texas, severe thunderstorms damaged buildings and flipped over small planes parked at an airport.

Flooding forced evacuations in northeast Nebraska and western Iowa, including a retirement home in Pierce, Nebraska. Residents of Avoca, Iowa, were filling sandbags to keep floodwaters from spreading, and the American Red Cross set up a shelter for anyone who was displaced.

A tornado in New Mexico ripped roofs from buildings in the small town of Dexter, about 200 miles (320 kilometers) southwest of Albuquerque. Authorities said five people were hurt, but none of the injuries were life-threatening. A dairy euthanized about 150 cows injured by the tornado. 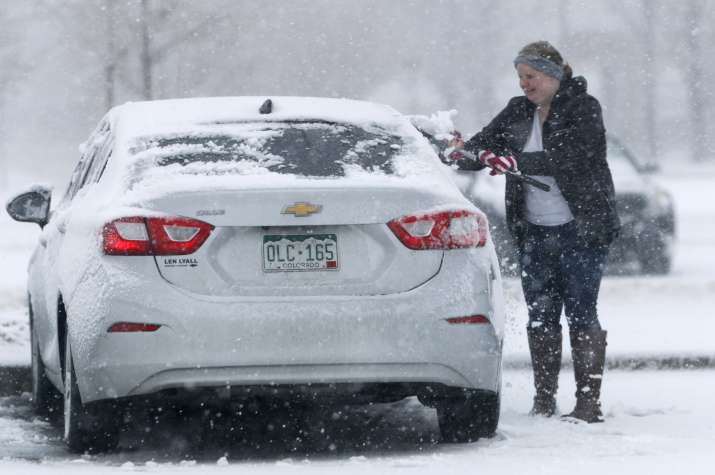 Chaves County Sheriff Mike Herrington said the tornado “took out” about 10 homes on one street.

High winds knocked 25 railroad freight cars off a bridge into a mostly dry riverbed near Logan in northeast New Mexico. No one was injured, New Mexico State Police said.

A wind gust of 92 mph (148 kph) was recorded in the mountains northwest of Denver.

Forecasters said the winds would pile snow into deep drifts.

The culprit was a sudden and severe drop in ground-level air pressure in Colorado, the most pronounced dive since 1950, Carbin said. It was caused by a combination of the jet stream and normal conditions in the wind shadow of the Rockies.

Air rushed into the low-pressure area and then rose into the atmosphere.

“It’s like a vacuum cleaner, really,” Carbin said. When that much air rushes higher into the atmosphere, it causes severe weather.

Meteorologists call the rapid change in pressure a “bomb cyclone” or “bombogenesis.”

Forecasters had warned about the storm for days, said meteorologist Ryan Maue of weathermodels.com.

“Everybody saw it coming. Some people underestimated it so they’re stranded and that’s unfortunate,” he said.