New Delhi: In the wake of hype created in the country due to several rape cases, a student has been denied internship in the Leipzig University of Germany on the grounds of ‘rape culture in

New Delhi: In the wake of hype created in the country due to several rape cases, a student has been denied internship in the Leipzig University of Germany on the grounds of ‘rape culture in India'.

If the screen shots of the two e-mails are to be believed, a professor from the Leipzig University – (identified as Annette Beck Sickinger) of the Institute of Biochemistry, Leipzig University - turned down the student saying, "unfortunately I don't accept any Indian male students for internships. We hear a lot about the rape problem in India which I cannot support. I have many female students in my group, so I think this attitude is something I cannot support, (sic)”

When the applicant reverted to the professor saying that this was a generalization and cannot be imposed on an individual, the professor wrote back, “I fully agree that this is a generalization and may not apply to individuals. However, it is also unbelievable that the Indian society is not able to solve this problem for many years now. Reports reach Germany on a weekly base, and especially these "multi-rape crimes" are threatening, but for me also demonstrate the attitude of a society towards women. Also female tourists are kidnapped by groups of males and then abused.

"Many female professors in Germany decided to no longer accept male Indian students for these reasons, and currently other European female associations are joining. Of course we cannot change or influence the Indian society, but only take our consequences here in Europe.” 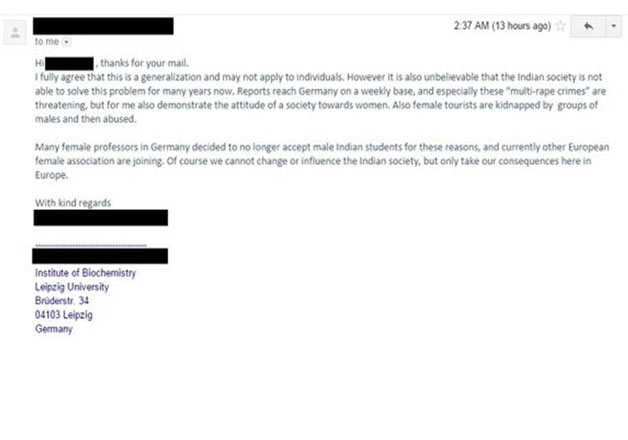 Apparently, the e-mails are creating a stir on the social media site – Twitter with people asking about the veracity of the content and others demanding that MEA may take up the issue with the German ambassador.