Kanhaiya Kumar: Delhi government has given its sanction for chargesheet against Kanhaiya Kumar in JNU sedition case. The permission is in connection with a 2016 sedition case that allegedly occurred on Jawaharlal NehruUniveristy Campus (JNU).

Kanhaiya Kumar: Delhi government has given its sanction for chargesheet against Kanhaiya Kumar in JNU sedition case. The permission is in connection with a 2016 sedition case that allegedly occurred on Jawaharlal NehruUniveristy Campus (JNU). On January 14, the police had filed a charge sheet against Kumar and others, including former Jawaharlal Nehru University (JNU) students Umar Khalid and Anirban Bhattacharya.

The police had said Kanhaiya Kumar-led a procession and had supported the seditious slogans allegedly raised on the campus during an event on February 9, 2016. 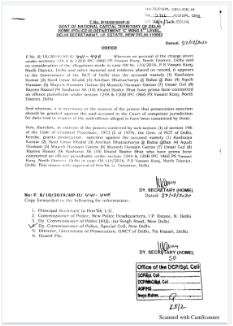 Delhi government led by Chief Minister Arvind Kejriwal has often found itself on the receiving end, mainly from BJP which has accused it of 'protecting' Kanhaiya Kumar by denying permission to prosecute Kanhaiya Kumar so far. Union Minister Amit Shah has also been on the offensive against Kejriwal on this issue.

Several pleas were filed in the Supreme Court with a demand that Kanhaiya Kumar be prosecuted.

Supreme Court on Monday had declined to entertain a plea that had sought directions to the Delhi government to sanction the prosecution of former JNU leader Kanhaiya Kumar in a 2016 sedition cases in a time-bound manner.

A bench headed by Chief Justice of India, SA Bobde, said the court cannot entertain such a general prayer.

The apex court was hearing an appeal filed by lawyer Shashank Deo Sudhi to challenge a Delhi High Court order that too had refused to direct the Delhi government to sanction the trial in the case.

Deo Sudhi said that while a decision on sanction of prosecution had to be given within three months, the said case was pending for more than a year with the Delhi government.

The petitioner also insisted on laying down of guidelines in heinous cases and urged that the rule of law must be adhered to.

(With PTI and IANS inputs)